Robert Streb is an American professional golfer who currently competed on the PGA Tour. Turned professional in 2009, he has won 2 PGA Tour, 2 Korn Ferry Tour, and 2 others. He finished his collegiate career playing for the Kansas State University where he earned All-American honors. He graduated in 2009.

Chickasha, Oklahoma native, Robert Streb was born on 7th April 1987, under the star sign Aries. He is the son of David Streb. Further, Robert has a brother, Garret Streb. As per nationality, he is an American and is of white ethnic background. The thirty-three years old stands 5 ft 10 in (1.78 m) and weighs 165 lb (75 kg; 11.8 st).

How Much Is Robert Streb's Net Worth?

Over the years, Robert Streb has earned megabucks and he’s undoubtedly a millionaire. As of 2022, his net worth is approximately $5 million. Not to mention, the major source of Streb's earning is golf: players paid a percentage of the purse for each tournament they play in and finish in the money.

Robert Streb's Wife: Is He Married?

Robert Streb is married to Maggie Streb. The couple attended Kansas State University where they met for the first time through their mutual friend. Though he was the instant star with the Wildcats, Maggie did not fully realize just how good he was when they first met. It took probably about six months to a year to realize how serious he was about golf. 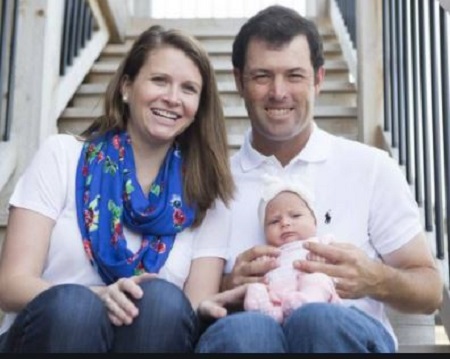 After dating for a year, Robert and Maggie tied the knot on 23rd June 2012, in a secret ceremony. On February 3, 2015, Robert and his wife welcomed their first child, daughter Catherine.

Back in 2012, Maggie spent some time as a substitute teacher but now she’s a full-time mother to Catherine and a full-time supportive wife to Robert. The happy family lives in Shawnee, Kansas, the same city where Maggie grew up. To date, there is no rumors of extramarital affairs, conflict, and divorce.

Stren turned professional in 2009 and played on the NGA Pro Gold Tour in 2010 and 2011. In 2012, he played in the Web.com Tour and won his first title on the Web.com Tour at the Mylan Classic in September, finishing T-3 at the BMW Charity Pro-Am and T-4 at the South Georgia Classic. In 2013, he joined the PGA Tour. His best results were T-16 at the Humana Challenge, T-18 at the Honda Classic, and T-22 at the Shell Houston Open.

In the 2015 PGA Tour season, he kissed his first PGA Tour victory at the 2014 McGladrey Classic at the Sea Island Golf Club on St. Simons Island, Georgia.