Pete Alonso is a baseball player by profession based in America who previously owned an NL Rookie of the Year award in 2019 in his debut season. He is currently playing for the New York Mets as a first baseman. Pete is also named a Polar bear for the power and the ability to catch the ball.

During his first year at Mets in Major League Baseball, he hit the home runs of 53. This is the record for the most home runs by a rookie. The same season, he won the 2019 MLB Home Run Derby.

Who is Polar Bear and what about his family?

The right-handed first baseman currently weighs around 90 kg with a height of 6 feet 3 inches. 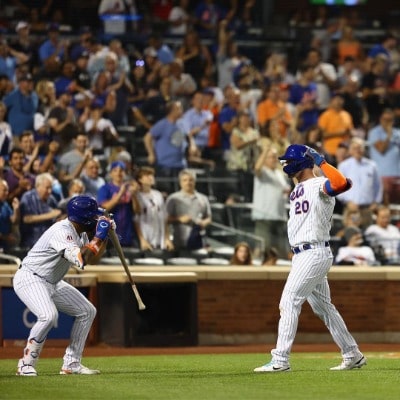 He currently plays for New York Mets since 2019 and wears Jersey number 20.

Pete's father's name is Peter Matthew Alonso and his mother's name is Michelle Alonso. Pete's family is originally from Barcelona, Spain from which his grandparents moved out during the Spanish Civil War.

He also has a brother named, Alex Alonso, who currently plays for the Queen's University of Charlotte.

Alonso was skinny and used to weigh less as a kid. For that reason, he used to get bullied by his friends. He used to play lacrosse and football in his early years. He grew up in Florida, US.

The athlete finished his high school at Henry B. School. Before that, he went to Jesuit High School where he studied for 2 years. That's when he decided to make his career in baseball.

For college, he attended the University of Florida and played baseball for Florida Gators. There, he also competed for Florida College World Series in 2015 and 2016.

The first baseman made his minor league debut in 2016 with the New York Mets who picked him in the second round of the MLB draft.

Later in 2019, he made his first professional debut as a rookie for the New York Mets. There he had his most memorable performance making up to All MLB First team, NL Rookie of the year, and MLB home run leader, all in the same season. There he broke the record for most home runs by a rookie and the first player in MLB history to hit 11 extra-base in his first 10 career games since 1900.

The net worth of Pete Alonso is estimated to be 2.46 million USD. He collected most of his earnings by playing baseball for New York Mets. NYM is paying him a good amount of sum to play for them. His current salary is 675,000 plus annually excluding extra bonuses and incentives.

Alonso also made 1.47 million USD in base salary between 2019 and 2021 along with 2 million by winning the Home Run Derby twice.

Relationship with Haley; Are they Married?

Pete Alonso is currently in a romantic relationship with his long-time girlfriend Haley Ranee. His love, Haley is a lifestyle blogger and an Instagram model by profession. She attended Michigan State University to major in political science and journalism. Pete met his gorgeous fiancee during his college days while he was playing for Florida Gaters in 2015. Since then, the love birds have been together.

In 2018, Pete proposed to his sweetheart Ranee and posted on Instagram saying the best days of his life. Later, he deleted the post and has never specified the reason behind it.

According to some sources, the pair are already engaged and are soon going to marry. Both Pete and Haley have never talked about it openly.

Pete and his fiancee run a non-profit organization called Homers for Heroes which aims to help and support everyday heroes in this pandemic.

They help every kind of people  of different professions including cashiers, city sanitation workers to volunteers around the globe

Here is a link to their official website Homers for Heroes