Ryan Miller is an American professional Ice-hockey player who currently plays as a Goaltender for the Anaheim Ducks of the National Hockey League (NHL). Additionally, Ryan was drafted by the Buffalo Sabres as a 138th overall pick in the 1999 NHL Entry Draft. Previously, he played for the teams like Buffalo Sabres, St. Louis Blues, and Vancouver Canucks.

As of 2019, Ryan has an estimated net worth over $40 million which is solely generated from his professional career. Also, he has collected $62,560,137 as entire career earnings, playing 16 seasons in NHL. Besides, he is enjoying a blissful marital relationship with his wife, Noureen DeWulf.

Ryan Miller Earnings; How much is his Net Worth in 2019?

As of 2019, Ryan as an estimated net worth over $40 million which is entirely generated from his professional career. Also, he has collected $62,560,137 as entire career earnings. Moreover, he receives $1,125,000 as an annual average salary from his team Anaheim Ducks.

Further, he is the 15 best-paid player of Anaheim Ducks while Ryan Getzlaf, Ryan Kesler are among the highest earner of the team with an annual average salary of $8,250,000 and $6,875,000 respectively.

Also, he also earns additional cash via different endorsement deals but he details about the deals and earnings are still undercover.

Is Ryan Miller Married? Know about his Personal Life

Ryan belongs got married to his beautiful wife Noureen DeWulf back in 2011. In particular, the duo tied their knot on September 3, 2011.

Moreover, the couple is blessed with a baby boy Bodhi Ryan who was born on March 20, 2015.

Ryan Miller with his wife SOURCE: The Puck Off

Reportedly, Ryan is a second husband of Noureen as she was previously married to avant-garde artist James DeWulf in June 2000. The couple eventually separated after being in 10 years of the marital relationship. 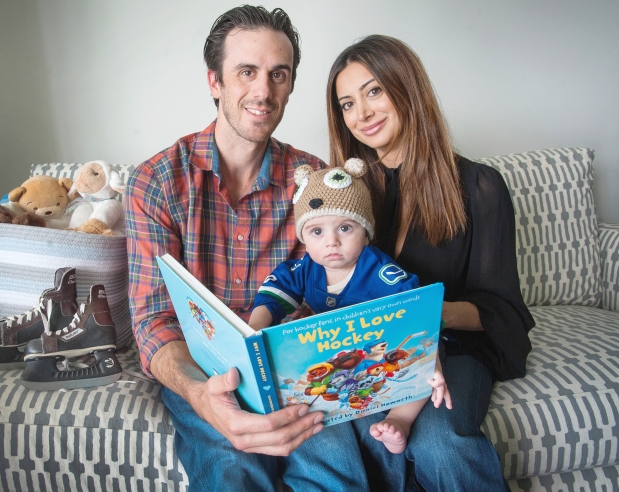 Ryan Miller with his wife and son SOURCE: Vancouver Sun

As of now, the couple seems to be living a happy life as they are frequently spotted attending events and spending their free time together. Besides, the couple has maintained a low profiled life and this might be the reason why we have very less information about their personal matter.

Ryan was born on July 17, 1980, in East Lansing, Michigan, the U.S. to Dean Miller and Teresa Miller. Additionally, Ryan is an American by birth and belongs to white ethnicity.

Additionally, he has a brother named, Drew who also plays hockey in NHL. Talking about his early career, he played for the Michigan State University Spartan, setting the with 26 career shutouts in National Collegiate Athletic Association (NCAA).

As of 2019, Miller currently plays for the Anaheim Ducks of the National Hockey League (NHL) as a goaltender. Additionally, he played 16 seasons in NHL, reprsenting different teams such as Buffalo Sabres, St. Louis Blues, and Vancouver Canucks.

Also, he has represented his country United States on an international level and was of the team that won the silver medal in the 2010 Winter Olympics. As of now, he is currently playing along with Jakob Silfverberg, Cam Fowler, John Gibson and many more.