Robert Anthony Woodard II is an American college basketball player who is currently representing the Mississippi State Bulldogs of the Southeastern Conference (SEC). Besides, he also played for the United States national team at the 2015 FIBA Americas Under-16 Championship in Bahía Blanca, Argentina, winning a gold medal. For now, he is entering the 2020 NBA Draft.

A native of Starkville, Mississippi, Robert was born on 22nd September 1999, under the star sign Virgo. The twenty-years-old holds an American nationality who came from the Afro-American ethnic background.

Mississippi State sophomore Robert Woodard II is forgoing his final two years of college eligibility to declare for the 2020 NBA draft. During the 2019-20 season, he averaged 11.4 points and 6.5 rebounds while shooting 43% from 3-point.

Woodard said to ESPN, "I am going into the draft with the intention of not going back to school, I am maintaining my eligibility because of the uncertainty about the dates and what workouts will look like, but I don't look it at is as testing the waters. I am all in with this thing."

CBS Sports ranked him 35th in the 2020 NBA Draft Prospect, ahead of Grant Riller, Zeke Nnaji, and Isaiah Joe. Now talking about projected salary, the media has reveled the salary of 1st round prospect i.e., up to 30th pick. Nevertheless, we can assume the wage from the previous draftee.

Robert Woodard II, 20, has maintained a low key personal life. There is no news, and rumors pop-out in social media regarding his hook-up and break up. Hence, the hunk is believed to be single. 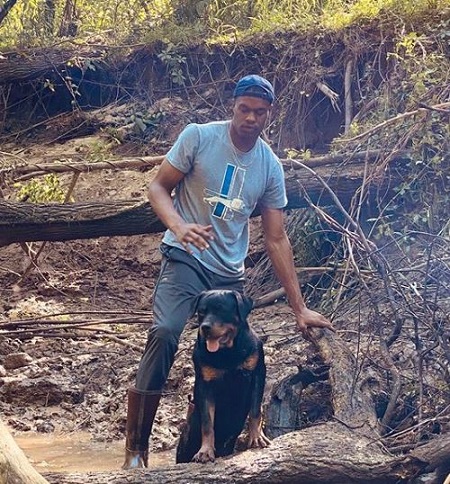 Moreover, he is active on Instagram with 6.6k followers. Scrolling through his socials, he has posted various pictures, some with friends, family, and mostly from basketball.

Robert is a son of Velma and Robert Woodard Sr. His father is also a former basketball player and a coach who left high school as the Mississippi all-time leading scorer in boys basketball, recording 4,274 points, prior to playing for Mississippi State at the collegiate level.

At high school (Columbus High School), he is a four-star recruit and the highest-rated prospect in his state. Further, he was offered Alabama, Memphis, and Ole Miss, among others but committed to play college basketball for Mississippi State where he is also majoring in business administration.