Reinier Jesus Carvalho is a Brazilian football player who recently signed with the Spanish club Real Madrid. Reinier also plays as an attacking midfielder for Brazil's under-23. Reinier build-up his football in the initial stage from the Vasco da Gama academy after joining in 2011. After some months, Reinier also trained with Botafogo and Fluminense before finally committing to Flamengo.

Reinier was born on 19 January 2002 in Brasília, Brazil. Reinier made his career debut against Bahia on August 4, 2019. Eventually, Reinier moved to Real Madrid signing a contract for six and a half years.

How much money does Reinier Earn?

Reinier Jesus recently signed with the Spanish giants Real Madrid joining the other two Brazilian teenagers Vinicius Junior and Rodrygo in the team. Real Madrid agreed to sign the player by paying out the release clause of €30 million (€24m) will go to Flamengo, while his family and agent will each net 10% (€3m).

The Brazilian teenager will reportedly earn thousands of dollars from the club just like other young players Vinicius and Rodrygo who earn £40,000 and £66,000 a week respectively.

Reinier's current market value is found to around $25 million U.S. dollars. From 2019 to 2020 his market value has changed by approximately $8 million dollars due to which different big clubs have targeted Reinier as Ajax was ready to give 25 million dollar euro, the arsenal was ready to give £25.6 million but Real Madrid beat all these clubs and signed Reinier in €30.00 million.

Reinier Jesus Relationship Status; Who is he dating?

Reinier is unmarried. He is just eighteen years old so legally he is not ready to get married, but secretly he might be in a relationship with someone.  Moreover, Jesus has not given any kind of information about his affairs in social media.

Jesus is the rising star so many girls might be involved in him, but he is not involved with any girls. It does not mean that he does not engage with a girl, he gets engaged with girls as a friend not more than that because Real Madrid is the dream team for him and his family so he is just focusing on training, body structure and so on.

Reinier's father's name is Mauro Carvalho. He is also a professional five-a-side footballer. Mauro is the ex-futsal player who helped Reinier a lot to become a good attacking midfielder. His father Mauro helped a lot for Reinier by showing the video and encouraged him to watch the video of the white club.

Being the son of a famous football player it became quite easier for Reinier to learn and get great success in football. Reinier Jesus had a dream to play from the Spanish club Real Madrid, he fulfilled or achieve his dream due to his father's lesson and hard work. He might not have reached his destination if his father did not help him. Therefore due to the close relationship between father and son, Reinier has been able to reach his goal.

Reinier Jesus spoke that he is compared with Kaka when he is on the field, and he loves the word because Kaká was an idol of Jesus. Kaka and Reinier both belong to the same county so obviously he watched him and try to copy the way of playing.  Reinier said that he wants to arrive in the box and finish and have always lots of touches as Kaka does in the game. 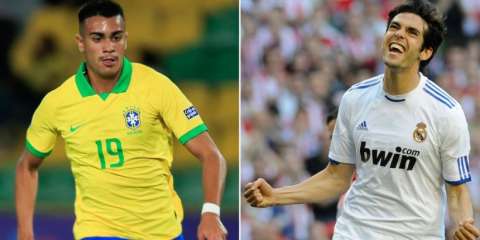 Reiner was very happy when he met his idol kaka. Kaka told Jesus a few things and wished him lots of luck. Reinier spoke that he is trying to play as kaka used to play for that he needs lots of practice hard works, moreover there are lots of things to improve which he will give at any cost.