Mo Bamba is an American professional basketball player who plays in the National Basketball Association (NBA). As of 2018, Mohamed Fakaba Bamba currently plays for the Orlando Magic as their Center.

As a Center, Mohamed Fakaba Bamba reportedly earns around $4,865,040 dollars as his yearly salary from Orlando Magic. Since he just started his career in NBA, his net worth is yet to be reviewed.

Mohamed Fakaba Bamba was born on May 12, 1998, in Harlem, New York to parents, Lancine Bamba and Aminata Bamba. As per his nationality, he is American and belongs to Afro-American ethnic group. Further, his star sign is Taurus. He grew up along with his siblings, Sidiki and Ibrahim (Abe) Johnson.

Bamba had a successful career in his college days, scoring an average of 12.9 points, 10.5 rebounds and 0.5 assists per game. He declared for the 2018 NBA draft.

Bamba ran faster than most of the NBA players. He refused to work out the Memphis Grizzlies and told them not to draft him. On June 2018, he was selected with the sixth overall pick by the Orlando Magic in the 2018 NBA draft. After a couple of weeks, he officially signed a multi-year, rookie scale contract with the Magic.

Bamba made his NBA debut in a game during the preseason and scored 12 points and 3 rebounds. In October 2018, he made his professional NBA debut in a game against the Miami Heat and recorded 13 points, 7 rebounds, and 2 blocks. His team roster includes players like Evan Fournier, Jonathan Isaac, Amile Jefferson, Jonathon Simmons, etc.

According to rumor, Bamba is in a long distance relationship with a senior from high school. Her name is Ibby Fischer and she lives in Shanghai, China. She is 6 feet tall and plays basketball and volleyball. 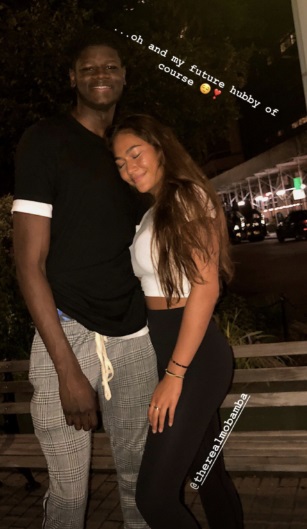 During his visit to China, Bamba met her and they had a really great time together. According to sources, Bamba often comments on her Instagram page and talks about getting married in the future.

Mo Bamba's Salary and Net Worth

Other than being a famous NBA Center, Mohamed Fakaba Bamba is pretty famous in social media. He has 591k Instagram followers and 22.3k Twitter followers.

Facts and stats of Mo Bamba

Mohamed Fakaba Bamba is not only a world-class athlete but also has a very attractive individual. The Famous NBA star is 7 feet in height and weighs around 100 kg.