Lemieux is widely recognized to have been one of the best player of all time as well as a gifted playmaker and fast skater. He is believed to have the net worth of around $150 million at current. Furthermore, he is married and has four children with his spouse.

Mario Lemieux's Net Worth and Endorsement

Mario Lemieux has an estimated net worth around $150 million, as of 2019. The significant source of Lemieux’s earning is his ice-hockey career.

Currently, he is the owner of the Pittsburgh Penguins with partner Ron Burkle. They bought the club for $107 million in 1999. However, the current worth of the club is $650 million. Back in 2010, the value was $235 million including the valuation of $28 million for sports, $100 million for the market,$76 million for the stadium, and $32 million for Brand Management.

Lemieux, who owns the 40% of the team, was willing to sell that team in late 2015 for the fee over $700 million. However, the two partners later called off the decision.

Late in 2000, he signed a career spanning deal with Nike for a worth $500,000 a season and would remain in effect for the rest of his career. The deal would include his endorsing their golf equipment and line of footwear. However, the deal expired in 2003.

Currently 52, Lemieux is a married man. He tied the wedding knot with his girlfriend Nathalie Asselin on 26th June 1993.

In April 1993, the couple became parents for the first time following the birth of their first baby girl, Laure, before a couple of the months of their marriage.

Two years later, the duo welcomed their second child named, Stephanie. Again in 1996, Asselin gave birth to their 3rd child, a son named Austin Nicholas, who was born prematurely, weighing just 2 pounds and 5 ounces. As of now, Austin is perfectly healthy and plays junior hockey for the Omaha Lancers of the USHL. 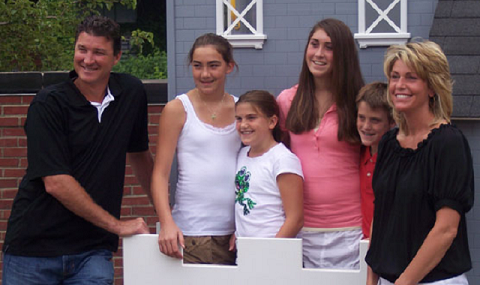 Adding up, their fourth child named Alexa was born in 1997. Lemieux’s spouse Nathalie Asselin is best recognized as Nathalie Lemieux who currently acts as vice president for her husband’s foundation, “Mario Lemieux Foundation”.

Mario Lemieux has opened his home to young Penguins stars such as Sidney Crosby and Marc-Andre Fleury until they settled well and had done the same to Jaromír Jágr previously. He holds both Canadian and American citizenship.

Mario Lemieux was born on 5th of October 1965 in Montreal, Quebec, Canada. His birth sign is Libra. He was raised alongside his two brothers Pierrette Lemieux and Jean-Guy, by his housewife mother and his father, a construction worker.

At the age of three, Lemieux started practicing hockey in his basement and prior to using real equipment; he and his brother used bottle caps as pucks and wooden kitchen spoon as a hockey stick.

Lemieux began his career playing in the Quebec Major Junior Hockey League (QMJHL) side Laval Voisins. In the 1983-84 QMJHL season, he broke the league record making 199 goals and 149 assists in 70 games. He ultimately finished his QMJHL season career with recording 247 goals, 315 assists with 562 points in three seasons.

Lemieux was selected as the first overall draft pick by Pittsburgh Penguins. Following a draft, he signed a 2-year contract worth $600,000 plus a $150,000 signing bonus. On 11th October 1984, Mario Lemieux made his debut against the Boston Bruins where he scored his first goal with his first NHL shot against Pete Peeters. In the very season, he played in the NHL All-Star Game and became the first rookie to be named the All-Star Games Most Valuable Player.

Throughout his career as the player, Lemieux has won various prestigious awards and honors.

Mario Lemieux has represented his national side, “Canada Team” in both senior and junior level. He was a part of “1983 World Junior Championship” who won the bronze medal, “1985 World Championships (Silver medal), “1987 Canada Cup”, “2002 Winter Olympics (gold medal and captain), and the “2004 World Cup of Hockey”.

On 1st September 1999, Mario’s application for ownership was approved by the NHL’s Board of Governors. His status as owner and player placed him in a potential conflict of interest with respect to NHL labor negotiations.

In 1993, Mario Lemieux founded the “Mario Lemieux Foundation”, and he was diagnosed with Hodgkin’s Lymphoma the same year. The foundation main focuses to raise fund for medical research projects, supports other organizations, including the University of the Pittsburgh Cancer Institute, the Children's Home of Pittsburgh, the Leukemia Society, the McGowan Institute for Regenerative Medicine, and the Lupus Foundation.

Headed to the Penguins game tonight? Stop by the Mario Mosaic in the Highmark Lobby to check out photos submitted by fans to create a 20' by 8' interactive photo experience !

Together with his wife, Lemieux has founded a program named “Austin’s Playroom Project” while they were in the hospital with their prematurely born son, Austin. The project builds playrooms in the various hospital to give a place for patients and their healthy siblings to play and concentrate on being normal as well as healing.