Lots Of Diapers For The McGregor Family, Conor McGregor Welcomes His Second Child 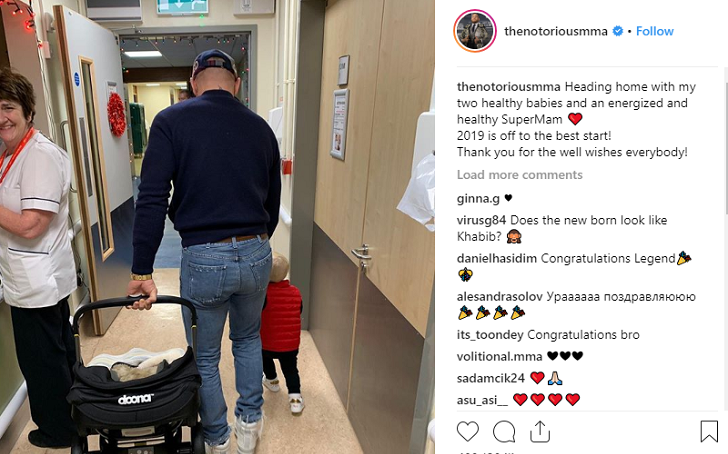 Conor McGregor and his Girlfriend welcomed their second child to their Family. On  3rd January of January in 2019, Conor welcomed his second child. The prizefighter let his fans know about the good news via his official Instagram.

Conor who is known to be a loving father now has another reason to fill his Instagram up with the pictures of another child, other than Conor Jack McGregor Jr.

Looks like Conor has another fight to attend and its not inside the Octagon, it's another diaper day after his first experience as a father since May 2017, for the former two-division champion. As Conor is someone who is pretty fond of kids and had even donated $10 thousand to a kid prior to his fight with Khabib now has another beautiful little kid on his lap.

Heading home with my two healthy babies and an energized and healthy SuperMam 2019 is off to the best start! Thank you for the well wishes everybody!

Looks like the Irish Fighter was way too excited to share the news about his second child and miss spelled Mom with Mam.
Prior to this, Conor McGregor had revealed that he was going to be the father for the second time in July 2018.

We, on behalf of playerswiki team, would like to congratulate Conor McGregor for the arrival of a new member in his happy family of three.

UFC 246: Conor McGregor on Kamaru Usman: "He has a sniff the jockstrap style". 2 months by Jack Ol

Twitter Reactions on: Who is the right man to become the UFC president after Dana White retires? 2 months by Jack Ol

John Kavanagh on Conor McGregor: "I don’t think there is a fighter on the planet that has his fight IQ" 2 months by Jack Ol

Coach John Kavanagh on Conor McGregor: "This is the best I've seen him" 3 months by Jack Ol

Khabib Nurmagomedov Vs Tony Ferguson" That fight is the best ever.” Chael Sonnen picks Tony 3 months by Jack Ol

Khabib Nurmagomedov has no Plan after Tony Ferguson; The Eagle planning to retire? 3 months by Jack Ol