Jenny D'Acquisto who recently became a mom to Corey junior is married to Corey Anderson who is an American Mixed Martial Artist competing in the Light Heavyweight division and ranked #5 in the UFC Light Heavyweight Rankings. Jenny, herself, was an American Mixed Martial Artist who fought in the Flyweight division. Her current record is of 2-5-0 (win-loss-draw). She is affiliated with Nick Catone & MMA Fitness. Her last match was against Gabriella Gulfin on 28 October 2017.

She grew up alongside brother, Jacob D'Acquisto in Wisconsin. Her personal details is unknown. She is married to Corey Anderson. They have a lovely child Corey jr. who was born on 8 March 2019. They also has a dog name, Athena.

Jenny D'Acquisto's Net Worth and Career Earning in 2020

The 5' 5'' Jenny, being a mom and wife to Corey Anderson, share Corey's net worth. Her fighting career started on 26 July 2014 against Sheena Brandenburg which she won by Knockout. She doesn't have considerable earnings.

However, she has a net worth of $150,000 earned by her husband. The major portion of which is received by her husband from his matches in the UFC which provides much bigger rewards than any other leagues.

Jenny and Corey Training for the MMA SOURCE: [email protected]_anderson6

Inside the octagon, she hasn't accumulated earnings since she hasn't been much active and currently is on five loss streak. However, the power duo might also receive sponsorship and endorsement deals that add value to their net worth.

Jenny D'Acquisto is married to her long time boyfriend Corey Anderson. They got married on the lovely day of Valentines on 14 February 2018. The couple is soon celebrating their 2nd year anniversary. Her husband Corey announced their marriage through Twitter where he posted a photo of their wedding and wrote:

2-14-18 the best Valentine's of my life. Married my best friend and can't wait to see what the future holds. I love you @jennydacquisto !! #immarried #bestfriends #married #mrandmrs #Anderson

Their relationship started back in March 2016. They are living a lavish lifestyle touring around different places and enjoying each other company at occasional dinners and various outdoor trips. 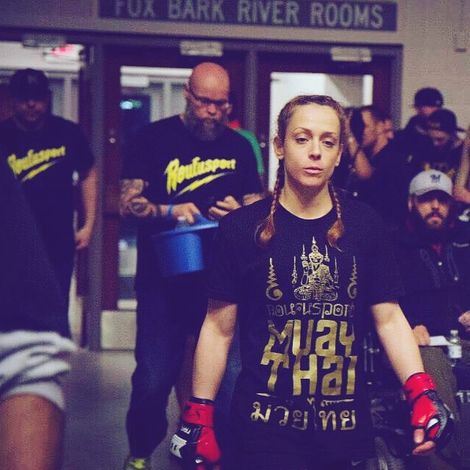 She had two wins against Rashelle Cook and Sheena Brandenburg. However, after her two victories, she has lost all her matches. She had lost to Chelsi Westdorp, Chi Sheibley, Katlin Shepherd-Adelman, Gillian Davis and Gabriella Gulfin.

She left the ring after marrying Corey Anderson and was pregnant with Corey Jr. after a certain time after being married. Her son Corey Jr. was born on 8th March 2019. After she had Corey Jr. she is still training and recovering to get back in form and ultimately back in the ring.