How Much Is Harvey Elliott's Net Worth And Salary In 2020?

Currently, Harvey Elliott is receiving a weekly wage of £7,500 weekly which is equal to £350,000 per annum from Liverpool. Mohamed Salah, Sadio Mane, and Alisson Becker are the team's highest-paid roosters. Besides, Elliott's earning from the club, he makes a decent sum from his national team as well as from sponsorship and endorsement.

As of 2020, Harvey's net worth is estimated at around $0.2 million. His current market value is recorded at €3.60 million, updated on 8th April 2020. The teenage footballer is yet to be a household name. Its been a few years him as a professional footballer but has already name and fame along with adequate money.

There is no confirmed information regarding Elliott's love life but he is often surrounded by various scandals and rumors regarding being a cheater boyfriend. Openly, the footballer has not come with his girlfriend or any live stories of him. Hence, the seventeen years old is believed to be possibly single.

Elliott is active on socials such as Instagram and Twitter. Not to mention, he only shares posts regarding his football career.

Harvey Elliott was born to English parents in Chertsey, England. He holds an English nationality and belongs to the white ethnic background. Furthermore, he has two younger siblings: a brother and a sister who often visit him during matches to cheer him. 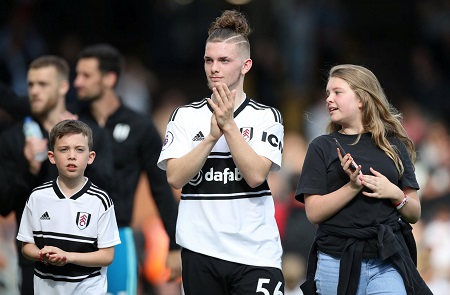 Harvey with younger brother and sister during the lap of honor after the final match of the 2019 season SOURCE: The Transfer Tavern

Regarding his height and weight, Elliott stands 1.7 m tall and weighs 67 Kg.

Elliott started his footballing at the Fulham Academy. During that time, he enrolled at Coombe Boys' School in New Malden. His first-team debut for the Fulham came on 25 September 2018, aged 15-year-old in the EFL Cup. The teenager had been at school earlier that day and was back at school the next morning. On 4 May 2019, he made his league debut appearing as a 88th-minute substitute for Andre-Frank Zambo Anguissa in a 1–0 away loss against Wolverhampton Wanderers.

In July 2019, Elliott was linked with a transfer to Liverpool. At the time, he also received interest from Paris Saint-Germain and Real Madrid. That year on 28 July, he was transferred to Liverpool for an undisclosed fee. Moreover, he made his Premier League debut for Liverpool, on 2 January 2020, when he replaced Mohamed Salah one minute prior to the final whistle in a 2–0 home victory over Sheffield United. On 6th July 2020, he inked his first professional contract with Liverpool.