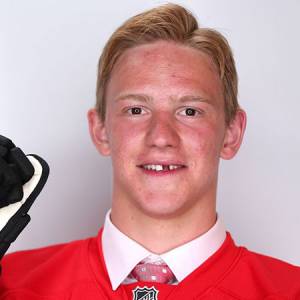 Does Evgeny Svechnikov Have a Girlfriend? Know About His Personal Life

As per the sources, Evgeny Svechnikov's marital status is single. Further, he is not rumored to be in a relationship with his probable girlfriend or married to his probable wife. Further, he seems to be focused on his goals. Additionally, there is no single evidence about his affair in any new portals or sites.

Being a celebrity, it must be a quite tough job to keep his private and professional life apart. Further, there is no single evidence about his affair in any new portals or sites. Besides that, Evgeny Svechnikov seems to be a momma's boy as he keeps traveling and sharing his pictures with his mother.

Being such a charming fellow, he has quite a huge followers in his social sites. Talking about his body measurements, The Famous NHL star is 6 ft 3 inches in height and weighs around 93 kg.

How Much Is Evgeny Svechnikov's Net Worth?

Further, the NHL player has an average salary of $1,137,500 annually while Henrik Zetterberg is the highest earner of the team with an annual salary of $6,083,333.

Evgeny Svechnikov so far has made earnings of $1,259,198 from his entire NHL career whereas Carey Price, Sidney Crosby is among the all-time highest earner of NHL.

Reportedly, Svechnikov will earn a base salary of $832,500, while carrying a cap hit of $863,333 in 2018-19. Kept aside Evgeny Svechnikov's financial earnings, his personal assets include a Home and a car. However, the detailed information is yet to be surfaced in the media.

Evgeny Svechnikov was born on 31 October 1996, in Yuzhno-Sakhalinsk, Russia to parents Igor Svechnikov and Elena Svechnikov. As per his nationality, he is Russian and belongs to the White ethnic group.

Further, his star sign is Scorpio. He grew up along with his sibling, Andrei Svechnikov. For Bars and Irbis, junior teams of the Ak Bars Kazan club system, Svechnikov began his junior career. He made his professional debut with Ak Bars in the 2013–14 season before reaching the age of 17.

At the 2013 World U-17 Hockey Challenge, Svechnikov represented Russia where he recorded seven goals and one assist in six games, winning a silver medal.