As a Power forward, Draymond Green reportedly earns around $17,469,565 as his yearly salary from Golden State Warriors. Further, Green has an estimated net worth of over $30 million.

Draymond Green's Net Worth In 2019

Draymond Green has an estimated net worth of over $30 million, mostly earned through his NBA career. Green so far has made earnings of $66,101,613 from his entire NBA career.

Endorsements and other ventures

Further, the NBA Player Draymond Green earns a good amount of money from various sponsorships. He reportedly earns over $4 million from sponsorship.  Some of his major deals are with Beats, Nike, etc.

Just got my 1 of 1 customized six side beats! S/O @beatsbydre #Beatsinthe6

Apart from his basketball career, Green makes smart investments. He and his business partner announced a partnership with Blink Fitness in 2018 to open 20 fitness centers across the U.S.

Getting the homie cleaned up a lil bit

Other than being a famous NBA Power forward, Draymond Green is pretty famous in social media. On September 14, 2015, he donated $3.1 million to Michigan State, the second largest ever made by an active athlete to his former school.

Twenty-nine years old NBA star is currently in a relationship with Hazel Renee, an American actress, and TV personality. Reportedly, the duo started dating in August 2017 and is going strong in their relationship.

Talking about his past affair, Green was romantically linked with Jelissa. Though, he has not opened up his relationship beginning and datings with Jelissa. However, the two were assumed to be lovers since their college days, as both attended Michigan State University. 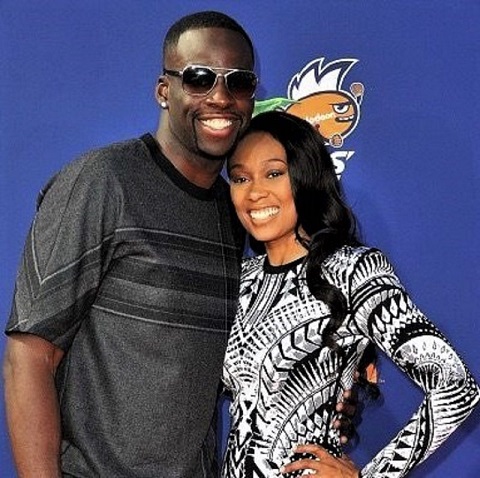 Draymond broke up with his college sweetheart and moth SOURCE: Bossip

Furthermore, he is reported to be the father of 2 children: Kyla (daughter) and Draymond Jamal Green (son) with his former partner, Jelissa. Nevertheless, Green is not the biological father of Kyle, as she is from Jelissa's previous relationship.

As of 2019, Green is possibly unmarried. He is living a blissful life with his girlfriend and sometimes he can be seen sharing some lovely moments with his children, Draymond Jr., and Kyla.

On 10 July 2016, Green was arrested for assault in East Lansing, Michigan. The night before, he had a conflict with Jermaine Edmondson, former Michigan State defensive back. The arresting report state Green went to Rick's bar and had bumped into Edmondson. After some discuss, two relate of Green allegedly choked Edmondson and his girlfriend.

The following night, both Green and Edmondson attended Conrad's Grill in East Lansing where Edmondson confronted Green about the incident the night prior.

Further, Green allegedly prod Edmondson in the chest and either punched or slapped him in the face. According to the source, Green had a blood alcohol level of .10 and admitted to slapping Edmondson and asked to apologize to the victim. After posting a $200 bail, Green was released four hours after the arrest.

Draymond Green was born on March 4, 1990, in Saginaw, Michigan to parents Wallace Davis and Mary Babers. As per his nationality, he is American and belongs to the Afro-American ethnic group. Further, his star sign is Pisces. He grew up along with his siblings, LaToya Barbers, Braylon Green, Jordan Davis, Gabby Davis, and Torrian Harris.

Draymond Green attended Saginaw High School in Saginaw, Michigan, the USA where he played for his high school basketball team. In his high school career, held an average of 20 points and 13 rebounds, as a senior.

In the 2012 NBA draft, Green was selected with the 35th overall pick by the Golden State Warriors. he signed a three-year, $2.6 million contract with the Warriors on July 30, 2012.

Moreover, Green signed an extension deal with the Warriors to a five-year, $82 million contract on July 9, 2015.

Facts and stats of Draymond Green

Draymond Green is not only a world-class athlete but also has a very attractive individual. The Famous NBA star is 6 ft 7 in (2.01 m) in height and weighs around 230 lb (104 kg).