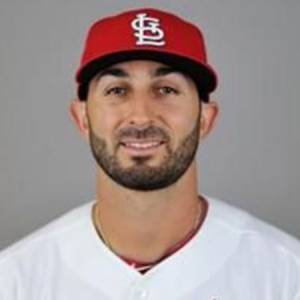 Daniel Descalso is an American professional Baseball player who plays in the Major League Baseball (MLB). As of 2019, Daniel Descalso currently plays for the Chicago Cubs as their Utility player. Daniel Descalso has played for other teams like St. Louis Cardinals, Colorado Rockies, and Arizona Diamondbacks.

Is Daniel Descalso Married? Know About His Relationship Status

Daniel Descalso is married to his beautiful wife, Julia Gamlen. Further, the couple dated each other since their school days as they were a high school sweetheart. Also, they attended St. Francis High School and UC Davis together.

They dated for ten years. Moreover, he married his long term girlfriend on 28 December 2013.

According to Daniel's Instagram, Daniel and his spouse have a baby girl. Daniel spends quality time with his beautiful wife and family. They often go to watch his game in his arena and cheer him up.

Who Is Julia Gamlen?

Julia is a high school sweetheart of Daniel. Talking about her, Julia is a former UCD soccer star. Also, Julia keeps her stuff private and you can't see much or anything around the social network. Surely one thing, the lady loves fighting for good causes. Additionally, there isn't any further information about Julia apart from the mentioned facts.

Talking about his body measurement, the famous MLB star is 1.78 m in height and weighs around 86 kg.

Know About Daniel Descalso's Net Worth and Salary in 2019

Daniel's career earnings, including bonus and incentives, are tabulated below:

Moreover, he is a 21st best-paid player of Chicago Cubs whereas Jon Lester is the highest earner of the team with an annual salary of $27,500,000. Furthermore, he 433rd best-paid player of MLB as per the 2019 financial report which is exactly similar to Lourdes Gurriel Jr.'s position.

Exploring, Daniel's social account, we found his association with Nike as he frequently promotes his Nike shoes in his account. However, detailed information about the deal is still to be revealed in the media.

Daniel Descalso was born on October 19, 1986, in Redwood City, California to parents George Descalso and Marylou Descalso. As per his nationality, he is American and belongs to the White ethnic group. Further, his star sign is Libra. He grew along with his five siblings.

He played San Carlos Little League baseball and went to Mountain View, California, Saint Francis High School. He pitched for three straight seasons as the number 1 starter of the team, playing 2nd base. Descalso went on to UC Davis, where he was a third base player and economics majored. Descalso was appointed to the All-Independent First Team of the NCAA in 2007.

In the third round of the 2007 Major League Baseball draft from the University of California, Davis, he was drafted by the St. Louis Cardinals and made his 2010 MLB debut for the Cardinals.

later, Daniel played for the Colorado Rockies and Arizona Diamondbacks. Descalso signed a two-year contract with the Chicago Cubs worth $5 million on December 18, 2018.