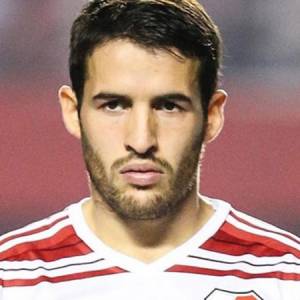 Camilo Sebastian Mayada Mesa famously known as Camilo Mayada is an Uruguayan footballer who currently plays as a midfielder for River Plate and the Uruguay national team. He started his senior career with Uruguayan side Danubio in 2010.

Camilo Mayada was born on January 8, 1991, in Sauce, Uruguay. He holds an Uruguayan nationality. Born with the great wisdom and talents, his zodiac sign is Capricorn.

At his early age, Camilo Mayada showed on the promise as a footballer. He started his junior career with Danubio in 2006 and played for three seasons with them.

Camilo Mayada turned professional when he started his professional career with club Danubio in 2010. He spent the majority of his years with the club and scored four goals in 97 appearances.

Camilo Mayada was then transferred to Argentine side Club Atletico River Plate in 2015 and he is still with the team. His transfer fee while he moved to River Plate in 2014 was $1.70 million but his outstanding performance in the club increased his price tag to $2.90 million.

He was included in the Uruguayan national U-20 football team for the 2011 South American Youth Championship and for the 2011 FIFA U-20 World Cup. He made his senior side debut for team Uruguay in 2014 and played with the teammates including Edinson Cavani, Luis Suarez etc. Until now, he has played four matches without scoring any goal for his nation.

Camilo Mayada is mostly known for his remarkable performance on the field. He always has been very good in his game. Like some other celebs, he kept his personal life entirely secret. He has not shared any of info about his affair, girlfriend, dating history, or marriage life.

According to some online sources, he is not married. He does not have a wife in his life. He might be an affair and dating someone but without exact info, it is difficult to say anything about him. He has not talked about his sexuality. He believed to be straight at all.

Besides his career, Camilo Mayada is quite closely connected with his family and friends. He has reached the age of 26 now. He has a standing height of 5 feet 9 inch, which is around 1.75m. He has a balanced and healthy weight of 165 lbs.

The dedication and devotion, Camilo Mayada showed towards his profession have taken him to the new height of success. His current transfer fee is known to be around $2.77 million dollars and the highest recorded fee was $2.90 million when he played for the River Plate in 2016.