Quamdeen "Ayo" Dosunmu is an American Basketball Player who ended his season for the Illinois Fighting Illini of the Big Ten Conference declaring for the 2020 NBA Draft. He was a five-star recruit coming out of Morgan Park High School according to recruiting sites such as Rivals, 247 Sports, and  ESPN.

The No. 11 for the Illini was born on 17 January 2000 under the star sign Capricorn. He was raised in Chicago, Illinois alongside brother Kube Dosunmu. Ayo is named after his father Quam Dosunmu and his grandfather was Yakub Dosunmu.

Chicago, Illinois native, Ayo Dosunmu is still a college basketball player who has played for the  Illinois Fighting Illini since entering his college year. According to the rules and regulation set by the NCAA, the college is not allowed to provide financial aid to the students of the athlete background but provide grants-aid to the student in terms of scholarship and various other incentives such as insurance to the players. As the students of Illinois University, Dosunmu would have received $50,000 in grant-aids.

In addition, he has represented the United State in the FIBA Americas U18 Championship and won the Gold in the tournament held on Canada. The team took home the cash prizes amounting to $2 million and each player had their share of the cash prize.

Moreover, Ayo will soon be headed over to the big league and start playing in the NBA as he has already declared for the draft. He is ranked #35 prospect in between Paul Reed and Robert Woodard II in the overall draft and is estimated to be drafted as an early pick in the second round. If Ayo is selected as the #35 prospect, he will have a projected salary in over millions. According to various sources, his projected salary is estimated to be around $4,000,000. Some of the top prospects in the draft are Anthony Edwards and LaMelo Ball.

As of 2020, his net worth is estimated to be $100,000 which will probably reach a million over the next few years after turning professional.

Ayo Dosunmu Girlfriend: Who is he Dating?

One of the 26 high school seniors to play in the Jordan Brand Classic on 8 April 2018 from Illinois after Dee Brown and Jalen Coleman-Lands, Ayo Dosunmu is private about his personal matters and has not shared any details regarding his girlfriend. As he likes to keep his personal space private, he has not even made his Instagram profile public yet. 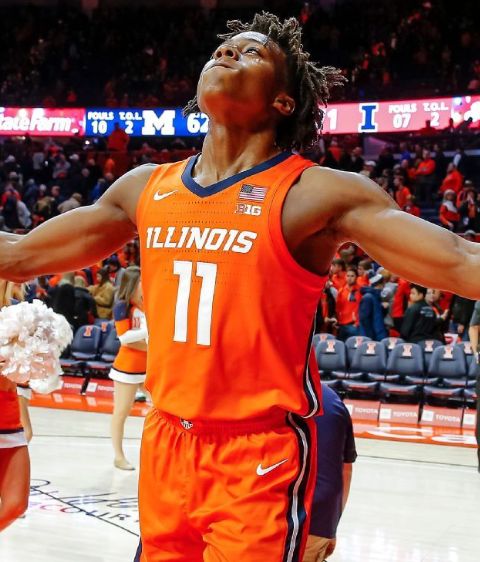 Ayo Dosunmu wearing the No, 11 Jersey for the Illinois SOURCE: ESPN

Since his private matters are not disclosed by the 20-years-old, we don't have enough evidence to prove whether his relationship status is single or not. For the time being, he might be focused on his career rather than his relationship matter assuming his declaration in the 2020 NBA draft.

He averaged 25.2 points, 7.4 rebounds, 7.3 assists, and 2.7 steals in his senior year at Morgan High leading the team to second-straight IHSA Class 3A championship.