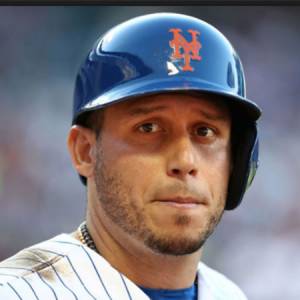 Asdrubal is married to his high school sweetheart Lismar Cabrera and has a son Meyer and daughter Ashley living with them.

Asdrubal Cabera is a married man. He tied the knot with his charming girlfriend Lismar Cabrera in 2007 in a lavish wedding ceremony in front of family and friends.

The couple met each other during their school days and started dating each other when they were in high school.

Asdrubal Cabera's wife Lismar is also a native of Venezuela. 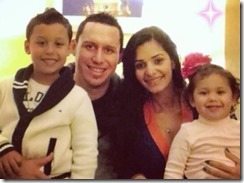 Asdrubal and his wife Lismar welcomed their first child Meyer, a son in 2008 and after a couple of years, they were blessed with a daughter named Ashley.

He is living a happy married life with his spouse since there aren't any details about their divorce or splitting, and they have shared a lot of photos and pots having a good time together. Further details about Lismar is not yet disclosed on the media. As going on exploring Cabera's social accounts, he has shared a lot of photos which means they have a great bonding.

The Famous MLB star is 6 feet tall in height and weighs around 93 kg.

Other than being a famous MLB Infielder, Asdrúbal José Cabrera is pretty famous in social media with a huge fan following.

Asdrubal Cabrera's Net Worth and Salary in 2019

Asdrúbal José Cabrera reportedly is blessed with a  net worth of over $20 million as of 2019. His 13-year MLB career has greatly helped him uplift his economic status.

Cabrera is estimated to be earning an annual salary of around $3,500,000 from the Texas Rangers team in 2019. In addition to this, his career earnings is reported to be $60,129,600 from his MLB career until 2019 and is projected to be earning a lot more in the near future.

Salary and Earnings by Year:

Cabera's market value is estimated to be around $9,645,407. He is also among the list of the highest earners of the MLB history. Besides all this, he also has a nice collection of cars and also owns a house. He also earns a good sum from his various sponsorships.

Asdrúbal José Cabrera was born on November 13, 1985, in Puerto la Cruz, Venezuela to parents Asdrubal and Zunilde.  As per his nationality, he is Venezuelans and belongs to the Mixed ethnic group and his star sign is Scorpio.

By profession, his father was a driver and his mother a housewife. He started playing at an early age of 3 and instead of going to high school, he focused on baseball.

He started playing professionally in 2002 with the Cleveland Indians. After playing over several seasons, he was traded for Zach Walters to Washington Nationals in 2013. He didn't play much for the Nationals and was again traded to Tampa Bay Rays in 2014.

In addition to this, he also played for several other teams including New York Mets, Philadelphia Phillies.  Currently, he is playing for the Texas Rangers since 2019 along with some of the reputed players including Rougned Odor.