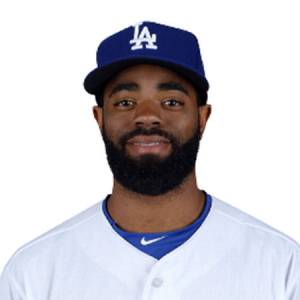 Andrew Toles is an American professional Baseball player who plays in the Major League Baseball (MLB). As of 2019, Andrew Toles currently plays for the Los Angeles Dodgers as their outfielder. Further, he previously played for Tampa Bay Rays.

As an outfielder, Andrew Toles reportedly earns around $535 thousand as his yearly salary from Los Angeles Dodgers. Further, Andrew Toles has an estimated net worth of over $500 thousand. No details about his girlfriend/wife is available yet.

Andrew Toles was born on May 24, 1992, in Decatur, Georgia to parents Alvin Toles and Vicky Toles. As per his nationality, he is American and belongs to African ethnic group. Further, his star sign is Gemini. He grew up along with his siblings, Morgan Toles and Kasey Toles.

Tolesenrolled at the University of Tennessee to play as a Volunteer for a college team. In 2011, he was named to the SEC All-Freshman team. However, he was dismissed from the team later that year.

Andrew Toles' Net Worth and Salary

As of 2019, Andrew Toles has an estimated net worth of over $500 thousand which is quite similar to Ross Stripling. Further, the MLB player has an estimated average salary of  $535,000 annually equal to J. T. Chargois.

Toles' contracts and earnings, including bonus and incentives:

Exploring his personal life, he is not married. Further, there isn't any information about his wife or girlfriend. He has kept his personal life low profiled and hasn't dropped a single hint about his relationship status in the media yet.

However, he might be in a secret relationship with his girlfriend or wife and living a happy life. Talking about his body measurement, the Famous MLB star is 5 feet 8 inches in height and weighs around 84 kg.

In the third round of the 2012 Major League Baseball draft, the Tampa Bay Rays selected Toles. Toles was criticized by manager Jared Sandberg in 2014 when he played for two months with the Charlotte Stone Crabs of Class A- Advanced Florida State League.

Toles attended spring training with the Rays in 2015. Before the season, however, he was released for disciplinary reasons and that year did not play professional baseball. Later, After the 2015 season, Toles signed with the Los Angeles Dodgers.

Currently, he is playing along with Clayton Kershaw, Russell Martin, Justin Turner and many more.