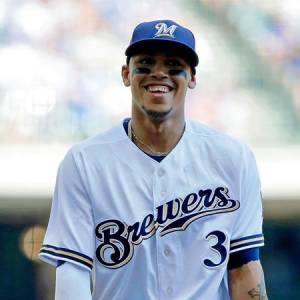 How Much is Orlando Arcia's Net Worth and Salary?

Orlando Arcia reportedly signed a one-year contract worth $565,700 with Milwaukee Brewers on March 5, 2019.

In addition to this, his recent contract gives him a guaranteed sum of around $565,700 along with an annual salary of $565,700 from the team Milwaukee Brewers in 2019.

Is Orlando Arcia Married or Single?

Orlando Arcia, age 24, hasn't married till date. He is believed to be single but there are possibilities that he might be dating his girlfriend secretly.

As going on exploring his official sites, he has kept his Instagram account in a private mode which means he keeps his personal life hidden from the general public and also maintains a distance between his personal life and other facts.

The Famous MLB star is 6 feet in height and weighs around 75 kg.

Orlando Jesus Arcia was born on August 4, 1994, in Anaco, Anzoátegui, Venezuela to parents Oswaldo Arcia and Lilibeth. As per his nationality, he is Venezuelans and belongs to the White ethnic group and his star sign is Leo.

He grew up along with his older brother, and two sisters. Furthermore, his brother, Oswaldo Arcia, has played in MLB who later signed with the Hokkaido Nippon-Ham Fighters in NPB.

Orlando's career started after he was signed as an international free agent in 2010 by the Milwaukee Brewers where he played in the Dominican Summer League.

Later on, in 2012 season, he got injured while he was in training session and has to be out from the game since 2013 season.

On 1st July 2018, he was demoted to AAA for the second time in the season. Nevertheless, he was recalled on July 26th and rebounded to finish the season hitting .236 with 3 homers and 30 RBI, including 2 walk-off singles.