Scottsbluff, Nebraska native, Nate Lashley was born on 12th December 1982, under the star sign Sagittarius. The thirty-eight years holds an American nationality and is of white ethnic background. Regarding his physique, he stands 6 ft 1 in (1.85 m) tall and weighs 190 lb (86 kg; 14 st).

Not to mention, Professional golfers are paid a percentage of the purse for each tournament they play in and finish in the money. Outside the court, they earns from sponsorships and endorsements.

He is sponosred by PING, Rosita's Hot Sauce, and Diamond Resorts. As of 2021, his net worth is approximately $3 million.

Turned Professional in 2005, Lashley joined the Nationwide Tour (now Korn Ferry Tour) in 2006. Before qualifying for the PGA Tour Latinoamerica in 2015, he completed for several years playing mini-tours and selling real estate. That season, he finished 8th on the money list in 2015 with five top-10 finishes. The following year, he won three events along with the Player of the Year award. That season led the money list which earned him a Web.com Tour card for 2017.

In 2017, Lashley won the Corales Puntacana Resort and Club Championship on the Web.com Tour, finishing 11th on the money list which also helped him to earn a PGA Tour card for 2018.

In June 2019, Lashley won his first PGA Tour victory at the 2019 Rocket Mortgage Classic. He was ranked 353rd in the world at the start of the week. He shot 63-67-63-70 to win by six strokes, earned his card on the PGA Tour until the end of the 2020–21 season, and entry into the 2019 Open Championship and the Players Championship, the Masters Tournament, and the Sentry Tournament of Champions in 2020.

Currently, he is ranked 101st in the Official World Golf Ranking.

Nate Lashley is currently in a relationship with a lady named Ashlie Reed. His girlfriend Reed often appears in Nate's game. Most notably the duo was captured hugging on the 18th green in Detroit after winning the Rocket Mortgage Classic golf tournament - his first PGA Tour title. 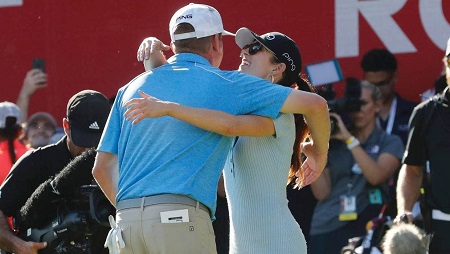