Michael Greller is well known for being a caddie for the renowned golf player Jordan Spieth. However, before earning fame as a caddie, Greller was just an everyday maths teacher at Narrow View Intermediate School in Gig Harbor, Washington.

Born in 1978, Michael hails from Grand Haven, Michigan, United States. Sadly, the caddie has not revealed when he celebrates his birthday. Other than that, it is known that his parents are John Greller and Jane Greller. Unfortunately, in February 2019, his father passed away after battling Parkinson’s disease for ten long years. The grief of losing a father just grew more when Greller lost his mother in October 2020.

In those sad times, he was supported by his close relatives and two siblings, Katie and Tom Greller.

Career: From A Maths Teacher To A Renowned Caddie

The Grand Haven native started his career as a middle-school maths teacher. Later, his interest in golf took him to be a professional caddie. To pursue his interest, Greller always used to help other golfers as their caddie during his free time.

The now-pro caddie first carried a golfer’s bag in 2006 after seeing a teenager carrying his golf kits in the US Amateur Public Links Championship. After that, he caddied every time he had free time.

In 2010, Greller joined hands with Justin Thomas as his caddie in the 2010 U.S. His work impressed Thomas so much that he referred Greller to Jordan Spieth for his games in the 2011 U.S. Junior Amateur—Spieth won the tournament.

Following that, Greller continued to carry the bags of Spieth. In 2013, after the amateur golfer became a professional, he offered Greller a permanent caddie contract. Ever since then, the caddie and golfer duo has always been together.

Moreover, the two have always shown a great bond of friendship. One such instance of their company was witnessed recently when the pro golfer supported his caddie when Greller lost both of his parents in just one and a half years.

How Much Is His Salary? Net Worth?

As a long-time caddie of one of the great golfer, it must be sure that Greller has managed to amass a healthy salary. Also, with a caddie earning almost 8% (10% if the game is won) of the golfer’s pay, Greller inevitably has a hefty net worth.

Well, as per some online sources, the caddie has a net worth amounting to $5 million.

Jordan Spieth’s personal caddie is a happily married man. Greller has been married to his lovely wife, Ellie Greller, since 2013. The two shared the wedding vows amongst some close guests at the Chambers Bay Golf Course, Washington. 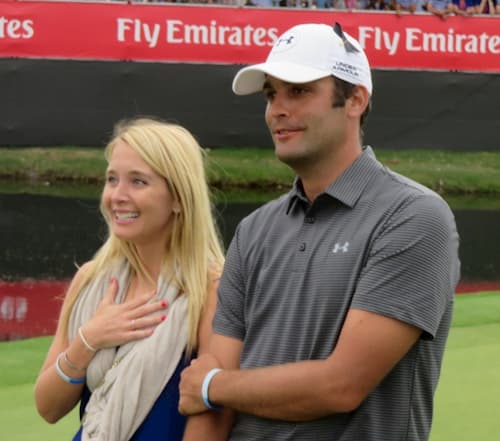 Greller’s wife is a former kindergarten teacher who used to teach at the Artondale Elementary School. However, she left her profession to accompany her husband on his tours.

Talking about the lovely duo’s children, they are blessed with a child. The couple welcomed their first and only child on October 13, 2017. Sadly, there are no details about the child’s name and in which grade he/she studies.