Matilda Castren is a US-born Finnish professional golfer who competes on the LPGA Tour. Recently, she became the first Finnish player to win on the LPGA Tour after sealing a victory at the 2021 LPGA Mediheal Championship.

Matilda Castren was born in 1995 in New York City. The 26-year-old golfer celebrates her birthday on the 18th of January every year. Although born in the United States, she holds Finnish nationality. Her zodiac sign is Capricorn.

Matilda Castren became familiar with golf at the age of 5 after her parents introduced the sport to her. By the time she was 10, she had already taken part in a competitive tournament. In 2011, she won her first major tournament, the 2011 Doral Publix Junior Classic. Moreover, in her college career with the Florida State Seminoles women's golf team, she managed to win seven individual titles in collegiate competitions. She also became a second-team All-American in 2014 and three-time All-ACC selection, thanks to her good performance.

After her college career ended, she began taking part in different competitions. Her performance at the 2019 Symetra Tour and the LPGA Q-Series gave her the chance to earn status for the 2020 LPGA Tour season. In 2020, she turned professional.

She managed to register a win at the Symetra Tour in the Mission Inn Resort and Club Championship in her rookie year. At the 2020 LPGA Drive On Championship, she recorded a career-best T8 finish. In total, she took part in nine events.

This year, on June 13, 2021, she became the first Finnish player to win on the LPGA Tour when she defeated Min Lee to win the 2021 LPGA Mediheal Championship. Her winning score was 71-69-69-65=274. Matilda is currently competing in the Volunteers Of America Classic in The Colony, Texas.

Her good performances have also resulted in her getting good sponsorship deals with several brands. She currently has a sponsorship deal with brands like Nike, Lockton Companies, and so on. Thanks to her earnings, she can relish her vacation at different places. 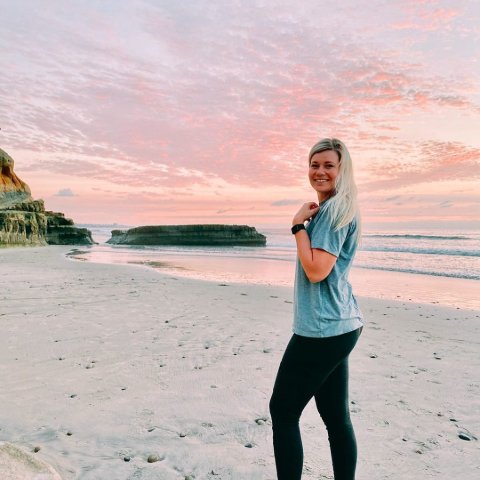 In addition, she also has had earned a healthy sum during her amateur career. Considering those factors, it must be sure that she has garnered a good net worth. Well, Matilda Castren's net worth is around $1 million - $2 million.

The Finnish professional golfer is currently in a healthy relationship with her long-time boyfriend, Daniel Moreno. His profession is unknown as of now, however, his Instagram bio states that he is a military guy and an assistant to the regional manager.

Matilda and Daniel first met around a few years ago and officially began dating on August 17, 2018. Since then, the couple has always been together and has supported each other in every circumstance. The boyfriend-girlfriend duo is usually seen traveling to different countries of the world and relishing their time together. Their adorable togetherness can be witnessed through Matilda's Instagram handle, where she usually flaunts pictures alongside her beau.

On August 17, 2020, she posted a series of pictures on Instagram to give a glimpse of how she and Daniel celebrated their second dating anniversary in Temecula, California. Her most recent picture alongside her boyfriend was on June 11, 2021. In that picture, both of them were standing in front of the Golden Gate Bridge, in San Francisco, California.

Her father's name is Petri Castren and her mother's name is Anne Castren. While her father is a businessman, her mother works as a school teacher. She has a good relationship with both of them. There is no news of her having any siblings.

For her academics, she initially attended Haukilahti Sports High School. Later, she enrolled at the Florida State University.