Marin Cilic is a professional Croatian tennis player. He has won 18 ATP singles titles, including a Grand Slam title at the 2014 U.S Open. His career-high singles ranking is world no.3, which he accomplished on 28 January 2018.

Cilic married his long-term girlfriend Kristina Milkovic in 2018. His current net worth is $17.8 million. His yearly income is $4.5 million.

How Much Is Net Worth Marin Cilic In 2019? Know Her Career Earning

Cilic has a huge collection of cars, which include Range Rover, Mercedes, Benz, Jaguar, Alfa Romeo, and Z4 series car manufactured by the BMW which is worth $80,000. Further, he owns a lavish mansion in Monte Carlo, Monaco worth $1.8 million.

Professional tennis player Marin Cilic is a married man. Marin Cilic and Kristina Milkovic dated long before being engaged in July 2017. They eventually tied the knot on April 28, 2018. 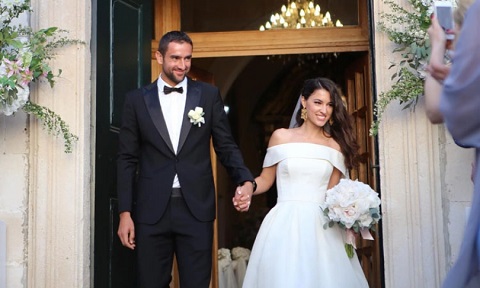 Who is Kristina Milkovic?

Kristina is a bilingual who speaks Croatian, English, Italian, and Spanish fluently. A proud graduate with a Master’s Degree in psychology and political science, she worked as a branding and sourcing specialist at Zagrebacka Banka. In 2016 became head of talent acquisition.

Besides, 33-year-old Cilic has a perfect height of 1.98m and a weight of 89 kg. His nationality is Croatian and falls under a white ethnic group. Besides his profession he loves football. His favorite players are Kaka and Robinho.

Marin Cilic was born on September 28, 1988, in Medjugorje, Bosnia, and Herzegovina. His parents are Zdenko Cilic and Koviljka Cilic. He started playing tennis at the age of 7. He grew along with his sibling brothers  Vinko, Goran, and Mile in his own birthplace. His younger brother also plays tennis.

In 2004, Cilic started his career at the junior ITF circuit. In the starting, he played on clay courts and was able to win La Vie Junior Cup Villach in singles. Moreover, he also won the Dutch Junior Open in doubles. Furthermore, he won the title at the French Open in 2005.

Furthermore, he also played his first ATP tour. Following year he participated in seven tournaments. Among them, he won one title, two Challenger tournaments, and one ATP tournament.

Coming to 2006 he won both the Croatia F1 and Croatia F2 events. However, in 2007 he won the first and second professional tournaments. He also reached the quarterfinals of the Queen's Club Championships and got defeated by Andy Roddick.

In the 2008 Chennai Open, he was defeated by Mikhail Youzhny in the semifinals.  He also participated in the Australian Open as well as Wimbledon but he failed to win the titles. However, he was able to win his first ATP title at the Pilot Pen Tennis tournament in New Haven, Connecticut.

At the starting of 2009, he won his second ATP title at Chennai Open. Following year he participated in most of the tournaments but he failed to win even a single title.

For the second time, he won the title at Chennai Open by defeating  Stanislas Wawrinka in 2010. He reached the semifinals of the Australian Open for the first time in his career. Besides this, he also participated in Wimbledon and US Open as well as in other tournaments. But he didn't win the title and was able to enter into the top-10 ranking.

In 2011 participated in the Australian Open but he got defeated to world No. 1 Rafael Nadal in the fourth round. He reached the finals at Umag and became the first Cortasian player to reach the finals. But he eventually lost the tournament with Alexandr Dolgopolov. However, he was able to win his sixth ATP title at Saint Petersburg. Moreover, he won his seventh and eighth ATP titles at Queen's Club Championships and Croatia Open in 2012.

In the 2013 Australian Open, Cilic lost the tournament with Andreas Seppi in the third round. Following year he failed to win even a single title. In 2014 he reached the quarterfinals of Brisbane by defeating Denis Istomin and Grigor Dimitrov.

The following year he won his 11th major title at Delray Beach. At  Indian Wells Masters he was defeated by  Novak Djokovic in the fourth round.  Tommy Robredo defeated him in the semifinals of the Croatia Open. However, he won his first major title at the US Open.