Marcus Semien is an American professional baseball player who plays in Major League Baseball (MLB). As of 2021, Marcus Andrew Semien currently plays for the Toronto Blue Jays as their Shortstop. Marcus Andrew Semien has played for other teams like and  Oakland Athletics Chicago White Sox and was drafted in the 2011 MLB Draft by the Sox.

Marcus is married to his girlfriend Tarah Murrey and has two sons Isaiah and Joshua living with them. As a Shortstop, Marcus Andrew Semien reportedly earns around $18,00,000 as his yearly salary from  Toronto Blue Jays and has an estimated net worth of over $10 million.

Marcus Semien is a married man. He is married to his gorgeous girlfriend Tarah Murrey but the detailed information about the wedding is not yet available. 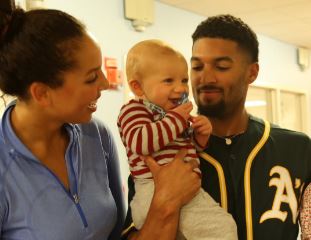 Marcus Semien with his family SOURCE: The Mercury News

Marcus and his spouse Tarah are blessed with two sons the first one is Isiah, born in April 2017 whereas their second son Joshua was born in May 2018.

Marcus is living a happy married life with his wife Tarah since no rumors and controversies are seen in their marital relationship. Besides, he is from an athlete family since his father was a football player of his time.

Who Is Marcus' Wife Tarah Murrey?

Tarah Lynnette Murrey was born on March 28, 1990, to parents Douglas and Barbara Murrey in Santa Clara, Calif. She also belongs to a family of athletes since her father played football and her mother was a volleyball player.

The Famous MLB star is 6 feet 1 inch in height and has a charming personality with a decent weight. Marcus Andrew Semien is not only a world-class athlete but also has a very attractive individual.

Other than being a famous MLB Shortstop, Marcus Andrew Semien is pretty famous on social media with a huge number of fan followers.

How much is Marcus Semien's Net Worth and Salary in 2021?

In addition to this, he has collected a good sum of around $33,863,653 from his entire MLB career until 2019. Since he hasn't left the MLB career, so he might earn a lot more in the near future.

Above all his financial earnings, he owns cars and a home. Moreover, he also receives a good amount from various sponsorships.

Marcus Andrew Semien was born on September 17, 1990, in San Francisco, California, the United States to parents Damien Semien and Tracy White. As per his nationality, he is American and belongs to a Mixed ethnic group and his star sign is Virgo.

Marcus' professional career started after he was drafted in the 2011 MLB Draft by the Chicago White Sox and he played for their minor leagues at the beginning. Later on, he was promoted to the Major Leagues in 2013 and his first game was against New York Yankees.

In 2014, he was traded to the Oakland Athletics and played with other players including Blake Treinen. He signed with the Toronto Blue Jays in 2021.