Louis Linwood Voit III famous as Luke Voit is an American professional baseball first baseman who is currently signed to the New York Yankees of Major League Baseball (MLB). After his senior year at Missouri State University, he was picked by the St. Louis Cardinals in the 22nd round of the 2013 MLB draft.

Wildwood, Missouri native, Voit was born on 13th February 1991, under the star sign Aquarius. The twenty-nine years old is an American by nationality and is of white ethnic background. Regarding his physique, he stands 1.91 m and weighs 102 kg.

How Much Is Luke Voit Net Worth? Contract & Salary

Luke Voit and his wife, Tori Rigman attended Lafayette High School and started dating since their school days. After graduation, Voit starred as a catcher at Missouri State University while she went to the University of Iowa. Despite they chose different Universities to attend, they always managed to stick around. 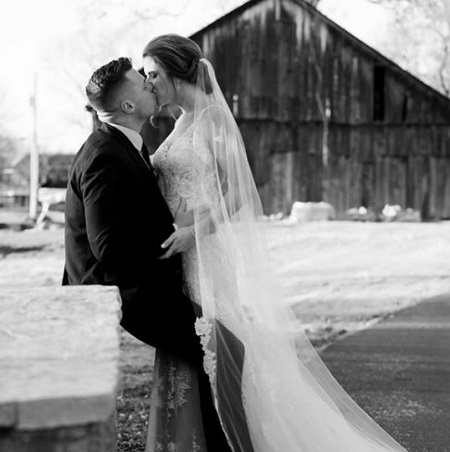 In October 2017, Voit popped the question while the two were on vacation. Around the same year, they scored a house and a Chevy truck. On 15th December 2018, the couple tied the knot at the Stone House of St. Charles in St. Louis.

Luke Voit is the son of Janice Voit and Lou Voit. He grew up alongside his siblings: a sister, Kate Voit, and a brother, John Voit, a former defensive lineman for the Army Black Knight football team.

Voit enrolled at Lafayette High School where he played for the school team as a first baseman and third baseman in his first three years, and as a catcher in his senior year. After graduation, he signed for the Missouri State Bears for four years.

At the 2013 MLB Draft, the St. Louis Cardinals selected Voit in the 22nd round. He started his professional career with the State College Spikes of the Class A-Short Season New York-Penn League. After three seasons in the minor leagues, he was promoted to the major leagues on 25th June 2017. He made his debut against the Pittsburgh Pirates.

On 27th July 2018, Voit was traded to the New York Yankees along with bonus pool money. He started his first base for the Yankees in the 2018 AL Wild Card Game.