Luke Gregerson is an American professional baseball player who plays in Major League Baseball (MLB) for the St. Louis Cardinals as their Relief pitcher in 2019. Lucas John Gregerson has played for other teams like San Diego Padres, Oakland Athletics, Houston Astros.

Gregerson reportedly earns around $5,500,000 as his yearly salary from St. Louis Cardinals as a relief pitcher and has an estimated net worth of over $30 million.

Is Luke Gregerson Married? Who is his Wife?

Luke Gregerson has not shared many details about his personal life but his marital status quite identified. He is married to his beautiful girlfriend Lindsey Kuehner. He tied the knot with Lindsey, daughter of Chuck Kuehner, on November 8, 2013, in Chicago, Illinois.

Luke and his wife Lindsey welcomed their first child, a son named Logan John in 2015 and Luke watched the birth of his child in his way home via  FaceTime on his phone. He left the team and traveled to Orlando to see his newly born son.

So far the couple is living a happy married life with no rumors of disputes and divorce.

How much is Luke Gregerson's Earnings in 2019? His Net Worth and Salary

Lucas John Gregerson has an estimated net worth of over $10 million as of 2019. However, he might earn some extra amount of money since he has some more playing years before he ends his career. Talking about his career earnings, Luke has earned a quite good amount of money which is around $39,629,300 until 2019.

Luke signed a two-year contract with the St. Louis Cardinals worth $11 million on December 10, 2017, with the guaranteed sum of around $11 million.

Lucas John Gregerson was born on May 14, 1984, in the City of Park Ridge, Illinois, the United States. Luke is American by nationality and belongs to the white ethnic group. Further, his star sign is Taurus. He grew up along with his 4 siblings including Lisa Gregerson. He is born to parents Duke Gregerson and Cindy Gregerson. 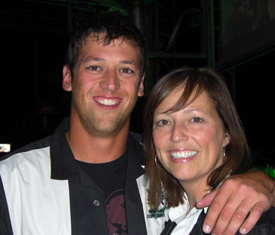 Luke began his professional baseball career with the St. Louis Cardinals since he was drafted in the 2006 Major League Baseball Draft. Later he was traded in 2009 season to San Diego Padres where he played for over four seasons until 2013.

Luke was again traded from Padres for Seth Smith to Oakland Athletics on December 3, 2013, and played only a season for them. After that, Luke started playing for the Houston Astros in 2014 and later left free agent.

Currently, he is playing for St. Louis Cardinals after signing a contract for two years and is playing alongside Miles Mikolas and Yairo Munoz.