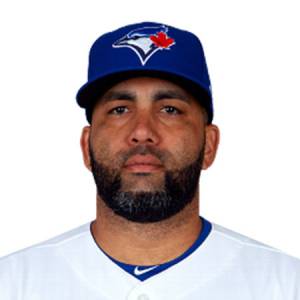 Kendrys is married to his girlfriend Yarley Morales and has three children.

Kendrys Morales' Salary in2019? How much is he worth?

Talking about his career earnings, so far Kendrys has earned a good amount of money from his MLB career which is around $74,326,205.

Kendrys Morales signed a three-year contract with the Toronto Blue Jays on November 11, 2016, worth around $33 million. The contract also guarantees a total sum of around $33,000,000 and Morales is currently receiving around $11,000,000 as his yearly salary. So far Kendrys hasn't reported about any endorsements and sponsorships deals.

Kendrys Morales is a married man. He is married to his beautiful girlfriend Yarley Morales but the information about his wedding date and venue is still not disclosed yet on the media.

After exploring some of the news portals and websites, it is found that they have been in a romantic relationship for a long time before getting married. So far Morales is living happily with his wife and they haven't reported any disputes in their marital relationship.

In addition to this, Kendrys and his spouse Yarley are blessed with two lovely children Kendrys Jr. and Andrea who are currently living with them. He also has a daughter named Hanely from his previous relationship.

Kendrys Morales Rodríguez was born on June 20, 1983, in Fomento, Cuba but the details about his parents and family aren't yet available on the media. As per his nationality, he is Cuban and belongs to the White ethnic group. Further, his star sign is Gemini.

Kendrys started his professional baseball career with the Cuban National team before moving to the United States. After that, he was banned in Cuba for leaving the nation. Kendrys began his minor league career in 2005 and played there for a season.

Morales made his Major League debut against Texas Rangers in 2006 with Los Angeles Angels of Anaheim. Due to his outstanding performance, Kendrys was placed in the 5th number in MVP voting behind Mauer, Teixeira, Derek Jeter, and Miguel Cabrera.

Later on, Kendrys was traded for Jason Vargas to Seattle Mariners in 2012 where he played for a season. In addition to this, He played for several other teams including Minnesota Twins, Kansas City Royals, Toronto Blue Jays.

Currently, Morales is playing for Oakland Athletics after he was traded from Toronto team in exchange for cash considerations.