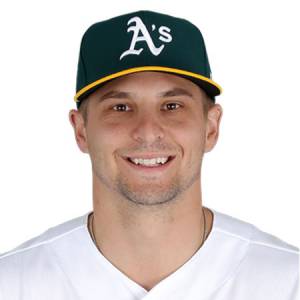 Who is Kendall Graveman Married to?

Kendall Graveman is married to his girlfriend Victoria Long on November 07, 2015, in a lavish wedding ceremony.

The couple lives in their home in Birmingham during the offseason.

In addition to this, Graveman has not given a single hint from which his past affairs or relationships can be guessed. Despite his busy schedule, Kendall manages the time for his friends and family. As exploring his official social sites, it is found that he is very fond of hunting.

How Much Kendall Graveman Earned Until 2019? His Net Worth And Salary

Kendall Chase Graveman has an estimated net worth of over $5 million in 2019 which will surely increase in future because he is still in his MLB career.

Talking about his estimated career earnings, Graveman has so far earned a decent amount of money around $8,493,702 from his baseball career until 2019.

Graveman is receiving a quite good amount of money from his team Chicago Cubs in 2019 as his annual salary which is around $575,000.

Kendall Chase Graveman was born on December 21, 1990, in Alexander City, Alabama, the United States to parents Gary Graveman and Sharon Graveman. he is American by nationality and belongs to the White ethnic group. Further, his star sign is Sagittarius.

At the beginning of his career, Kendall played in the minor leagues until 2014 and later made his MLB debut against Boston Red Sox where he played for a season. After that, in the same year of his MLB debut, Graveman was traded alongside three other players for Josh Donaldson to Oakland Athletics.

Kendall played for over several seasons with the Oakland Athletics starting from 2014 and is now playing with Chicago Cubs and is also opted for 2020 season. Some of the Kendall Graveman's current teammates are Tyler Chatwood and Anthony Rizzo.