John Brebbia has a total estimated net worth of around $1 million as reported in 2019 and is receiving a salary of around $569,300 from St. Louis Cardinals.

John Brebbia and his wife Amanda Jones reportedly dated for a couple of years before getting married. The couple tied the knot on November 19, 2016, in Asheville, NC.

Besides, the couple is a proud parent of their son who was born in June 2019. Amanda's father Jones runs a wine business in North Carolina.

The exact information regarding the relationship of John is not yet disclosed but some of the websites mentioned that he was in a romantic relationship with his girlfriend Amanda for a very long time before getting married.

John Brebbia has a total estimated net worth of around $1 million in 2019. In addition to this, he is currently receiving a quite good amount of money around $569,300 as his salary in 2019 from the St. Louis Cardinals.

As we are discussing his estimated career earnings, John has so far made a decent amount of money around $1,472,332 from his MLB carer until 2019 and surely he is going to earn a lot more in his future if he didn't quit baseball career. Paul Goldschmidt is among the highest earners of the Cardinals team with an annual average salary of around  $26,000,000.

Brebbia so far hasn't mentioned about any endorsements and sponsorships. Besides, his wife Amanda's family owns a wine business and also has a Jones von Drehle Vineyards, a sprawling site complemented by a winery on the hillside. They are into business for around 12 years now.

John Brebbia was born in Boston, Massachusetts on May 30, 1990. John is Ameican by nationality and belongs to the white ethnic group. 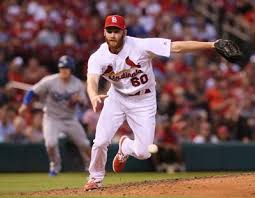 John Brebbia started his professional career after being drafted in the 2011 Major League Baseball draft by the New York Yankees in the 30th round where he made his debut with Staten Island Yankees and played almost eight seasons.

In addition to this, he also played for Arizona Diamondbacks and was later selected by St. Lois Cardinals for the minor leagues in the Rule 5 Draft at 2015 Winter Meetings. Brebbia made his MLB debut against Colorado Rockies after being promoted to major leagues in 2017.

Since 2015, Joh Brebbia is playing with the St. Louis Cardinals and is the teammate of some popular names in the MLB history including Miles Mikolas and Kolten Wong.