Jarred Kelenic is an American professional baseball outfielder who is signed to the  Seattle Mariners of Major League Baseball (MLB). He was picked in the first round of the 2018 MLB draft by the New York Mets. Later, that year, he was traded to Mariners and made his MLB debut in 2021.

Waukesha, Wisconsin native, Jarred Robert Kelenic was born on 16th July 1999, under the star sign Cancer. The twenty-two years old holds an American nationality and is of white ethnic background.

How Much Is Jarred Kelenic's Net Worth In 2021? Salary & Contract

As of 2021, Jarred Kelenic's net worth is approximately $4 million.

Jarred Kelenic is in a relationship with Gina Muzi. The couple started dating in 2018 and relishing their romance so far.

The duo is not shy to flaunt their love in front of the world. They often post each other on their respective socials. 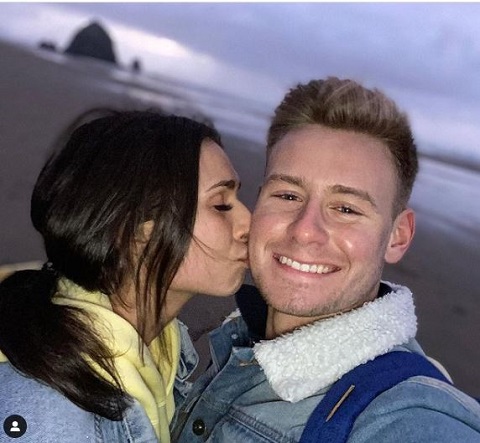 His girlfriend Gina is a college soccer player at the University of Portland. Source says, the 5-foot–9-inch plays for FC Wisconsin in the Elite Clubs National League.

Kelenic enrolled at  Waukesha West High School where he played baseball for the school team. Further, was named MVP of USA Baseball's U-18 team in 2016 that won gold at the Pan American Games.

He committed to the University of Louisville for his collegiate career.

In 2017, he played for Team USA 2017 and won a gold medal for the second consecutive year.

In the 2018 MLB Draft, Kelenic was picked sixth overall by the New York Mets. Upon signing with Mets, he was assigned to the Rookie League Gulf Coast League Mets.

Later, he was promoted to the Rookie League Kingsport Mets of the Rookie-level Appalachian League. Overall, he played 56 games between two clubs, slashing .286/.371/.468 with six home runs, 42 RBIs, and 15 stolen bases.

On 3rd December 2018, Kelenic was traded to the Seattle Mariners along with Jay Bruce, Gerson Bautista, Justin Dunn, and Anthony Swarzak in exchange for Robinson Cano, Edwin Díaz, and $20 million.

Kelenic started 2019 playing for the West Virginia Power of Class A South Atlantic League and was promoted to the Modesto Nuts of the Class A-Advanced California League.

At the beginning of the 2021 season, Kelenic was assigned to the Tacoma Rainiers of the Triple-A West League.

However, on May 13, 2021, he was promoted to the major leagues for the first time. That same day, he made his debut starting left fielder against the Cleveland Indians, going hitless in four at-bats.