Jake Petricka's Salary in 2019; How much is Petricka worth?

Jacob Steven Petricka has an estimated net worth of over $3 million in 2019 and currently earns around $0.9 million as his annual salary. Talking about his career earnings, he has earned a nice amount of money from his professional baseball playing career until 2019 which is around $4,558,916 and it seems that he is going to make a lot more money in his future as it's just the beginning fo his baseball career.

Jake Petricka reportedly signed a one-year contract with the Milwaukee Brewers team which is worth around $900,000 and the contract is signed on January 8, 2019.

In addition to this, he is guaranteed a sum of around $900,000 from the team and also he receives a decent amount of money from the Brewers which is around $900,000 as his yearly salary. Lorenzo Cain is also among the highest paid players of the Brewers with an annual salary of above $15 million.

Talking about his sponsorships and endorsements, some of the brands provide him their products Platinum Sports and Scuf Gaming but he hasn't mentioned clearly the details about them.

Is Jake Petricka Married or Single?

The famous MLB player Jake Petricka is an attractive individual along with a charming personality. He is married to his wife whose details is not yet available. 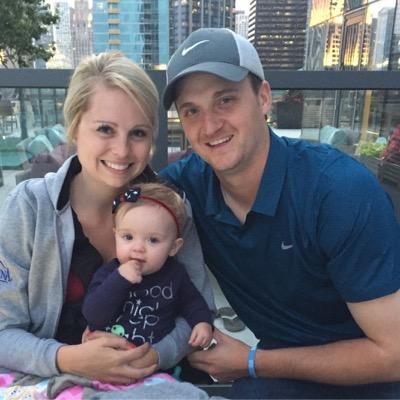 CAPTION: Jacob Petricka with his wife and child SOURCE: Twitter

As going on exploring his official social sites, it is found that Jake and his wife are blessed with two children, a son named Oliver Steven Petricka born in 2016 and a daughter Madison Elizabeth born in 2014.

In addition to this, information suggesting his past affairs or relationships isn't yet disclosed on the media. Despite his busy schedule, he manages time for his family.

The famous MLB player stands a height of 6 feet 3 inches tall along with a decent weight of 91 kilograms. Talking about his age, he is currently 31 years old.

Jacob Steven Petricka was born on June 5, 1988, in Northfield, Minnesota, the United States and details about his parents are still not available. As per his nationality, he is American and belongs to the White ethnic group. Further, his star sign is Gemini.

Jacob Steven Petricka played college baseball for the Iowa Western Community College for two years starting from the 2006 season. Later on, Petricka attended the Indiana State University and played for the University team

Jake began playing professionally with the Chicago White Sox and was promoted to the Major league games in 2013 and his debut was against Kansas City Royals team where he played for over several seasons until 2018 season.

In 2018 Jake again started his minor league games for the Toronto Blue Jays team and he didn't play much for them and soon after he was left, free agent. Currently, he is in a one-year contract with the Milwaukee Brewers team which is signed on January 8, 2019.