As a pitcher, Jace Fry reportedly earns around $569,000 as his yearly salary from Chicago White Sox. Further, Jace Fry has an estimated net worth of over $500 thousand.

Additionally, he is in a romantic relationship with his beautiful girlfriend, Lauren Watkins.

Jace Fry's Net Worth in 2019? How much is his Career Earnings and Salary?

As per the recent report, Jace Fry has an estimated net worth of over $500 thousand. Further, the MLB player has an average salary of $569,000 annually. Jace Fry so far has made earnings of $1,847,421 from his entire MLB career.

The details about Fry's career earnings and salary:

Is Jace Fry Married? Know about his Relationship Status

Jace is not married yet. However, exploring his social account, he seems to be in a romantic relationship with his beautiful girlfriend Lauren Watkins. Despite being in a relationship for long, the couple hasn't planned for getting married yet.

Further, Jace and his girlfriend, who is 20 weeks pregnant, are expecting a baby soon.

I’m truly thankful to get to spend time with this hot momma on her bday! Pretty good timing for a rain out if you ask me ?? happy birthday babe ????

Previously, he was in a relationship with Kelsi Blalock. Apparently, the couple met in Oregon State, where Fry was pitching for the Beavers. Kelsi ended her relationship with Jace, accusing him of cheating, giving her an STD. Further, She seemingly ended her engagement on social media calling him as a sociopath. 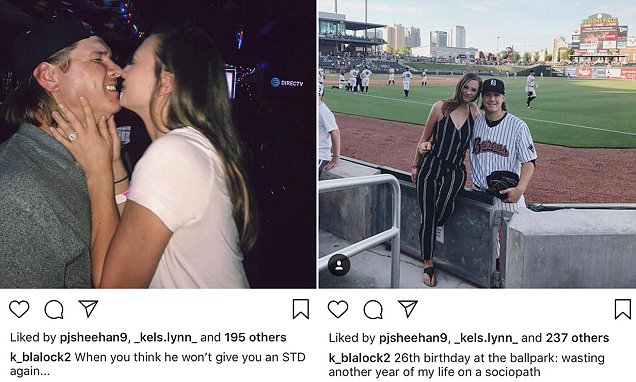 Jace Fry's fiancée accuses him of giving her an STD again SOURCE: Dailymail

As per the reports, Jace is living a happy life with his current girlfriend and currently, there aren't any rumors about their separation or divorce in recent time. Also, his girlfriend regularly attends this game to cheer him up hence, this shows the strong bond between them.

Talking about his physique, the Famous MLB star is 6 feet 1 inch tall in height and weighs around 190 lbs.

Jace Fry was born on July 9, 1993, in Beaverton, Oregon to parents Steve Fry and Candy Baur. As per his nationality, he is American and belongs to the White ethnic group. Further, his star sign is Cancer.

Fry grew up in Beaverton, Oregon, playing baseball in the Little League. In the 2006 Little League World Series, his team, Murrayhill Little League, represented the Northwest, where the team made it to the U.S. championship game.

Talking about his education, Fry graduated from Beaverton's Southridge High School and committed to enrolling in a college baseball scholarship at Oregon State University.

In the third round, with the 77th overall selection, the Chicago White Sox selected Fry from the 2014 MLB draft. He signed with the White Sox, receiving a signing bonus of $760,000, and assigned him with the Great Falls Voyagers to make his professional debut.

On September 5, 2017, the White Sox promoted Fry to the major league. Fry started the 2015 season with the Class A-Advanced Carolina League's Winston-Salem Dash.