Since becoming professional in 2013, Ivashka has played in many games and won prominent titles. He upset No. 6 Alexander Zverev Jr. for his biggest career win en route to 2021 Munich SF as Q. Ivashka was passionate about playing tennis from an early age. He started playing after turning 5, watching his father play. If he weren't a tennis player, he would be a football player, as he was initially passionate about playing football.

Ivashka is estimated to have a net worth of over $1 million, thanks to his long-term professional career as a tennis player. Playing in many games, he has taken home an impressive profit. Ivashka turned pro in 2013, winning $4,404 in the same year. The following year, he took prize money of $792 in doubles and $4,172 in singles. With his active participation and playing skills, Ivashka began playing in major tournaments, which allowed him to maximize his earnings. In 2015, Ivashka earned a total of $19,717. After winning some games in professional tournaments, Ivashka took $774,186 (singles & doubles combined) in the year 2022. Aryna Sabalenka is another Belarusian tennis player having an impressive fortune. In total, Ilya has gathered $2,645,360.

Being a professional tennis player, Ivashka also makes money from brand endorsement, which he often promotes via his social media posts.

Who Is Ilya Ivashka's Wife or Girlfriend?

Ilya is reportedly married to his beloved wife, who goes by the name of Veronika Shkliaeva. The couple has been sharing the relationship of a husband and a wife for quite a while now. Ivashka and Veronika had kept their love life away from the media, due to which we are unknown when they began dating and tied the knot.

Furthermore, the duo shares a strong bond and have also supported each other in every step of their career. Ivashka has not hesitated to talk about his wife's support with the press. He won his first ATP title at Winston-Salem in 2021.

After winning the title, Ivashka shared his happiness and thanked his wife. He took to social media to thank his wife. It seems like they have not given birth to any kids yet. Ivashka lives a low-profile life with his wife.

The professional tennis player, Ivashka, has worked with a few sports brands which he wears in major tournaments. Also, he promotes them on his Instagram account. Primarily, Ivashka has collaborated with Hydrogen and Head. Ivashka has a clothing sponsorship for famous sportswear named Hydrogen. He wears their t-shirts and other clothing. Likewise, Ivashka has a racquet sponsorship contract with Head. Ilya has also used the Head Graphene 360 Radical MP racquet.

Ivashka was born Ilya Uladzimiravich Ivashka on February 24, 1994, in Minsk, Belarus. The Minsk native has a strong bond with his supportive parents, Uladzimir and Anzhela. It seems like his father also played tennis, as Ilya began playing after watching his dad play. Ilya Ivashka with his friends in a football game.  SOURCE: Instagram @ilyaivashka

Apart from that, Ivaskha also took inspiration from star player Roger Federer. Furthermore, Ivashka has kept the details of his parents confidential. Due to that, we can't say much about his father and mother.

Ilya Grew Up With His Brother, Aleksei

Ivashka has received great support from his family. He is not only the child of his parents, as Ilya was raised alongside his one brother named Aleksei.

The Ivaskha brothers have a good connection, but Aleksei prefers to stay away from the limelight. Ilya has not made a single post with his sibling on his Instagram account.

A Look at Ilya Ivaskha Professional Career and Coach

Daniel Navarro Molina currently coaches Ilya, but Jose Checa Calvo previously coached him. Jose is also a former professional player. Ivaskha turned pro in 2013 and entered the top 150 when he hit a career-high ranking of No. 147 on February 26, 2018. 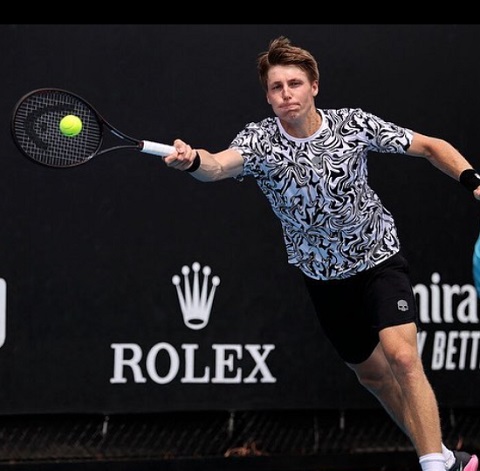 Apart from that, Ivaskha has also represented his nation in the Davis Cup.

Ivaskha is an active social media user with a strong Instagram presence. We can find him under the username @ilyaivashka. At the time of this post, he has amassed over 10.9k followers, and his account has also been verified. Ivaskha made his first post on Instagram on October 18, 2014.