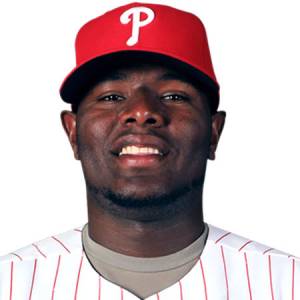 Héctor Neris reportedly earns around $1,800,000 as his yearly salary from Philadelphia Phillies as a pitcher. Further, he has an estimated net worth of over $2 million.

Hector Neris is a popular name in the baseball field so it is common for discussing his personal life. So far Hector hasn't mentioned any information from which his current relationship/married status can be guessed.

Hector has kept his official Instagram account private, which proves that he likes to be low-profile and hence doesn't share his personal life with the media or the public. Without confirmation, it is hard to guess who is Hector's girlfriend.

In addition to this, he is a career-focused man and maintains a distance between his professional and personal life. Thus we cannot say whether he is married or has a girlfriend. Besides, he also hasn't mentioned his family and parents but he seems to be enjoying a good time with his friends.

How much is Hector Neris' Net Worth and Salary?

Héctor Neris has an estimated net worth of over $2 million in 2019 and he is sure to add some more amount to his net worth since he is still in his playing career. Hector Neris has reportedly signed a one-year contract with the Philadelphia Phillies which is worth $1.8 million and is signed on January 10, 2019.

Furthermore, the contract also guarantees a sum of money which is around $1,800,000 and Neris is receiving a total sum of around $1,800,000 from the Philadelphia Phillies as his annual salary. Andrew McCutchen is among the top 5 highest earners of the Phillies team.

As we are discussing the topic of Hector's career earnings, so far he has approximately earned a quite good amount of money around $3,586,869 from his baseball playing career until 2019.

Héctor Neris was born on June 14, 1989, in Villa Altagracia, San Cristóbal, the Dominican Republic. He is Dominicans by nationality and belongs to the Mixed ethnic group. Further, his star sign is Gemini.

Hector started his professional baseball career In 2010 with Philadelphia Phillies after he was signed as a free agent. In the beginning, he played with the Dominican Summer League Phillies. Later on, during his 2017 season, he also played in the 2017 World Baseball Classic for the Dominican Republic national baseball team.

Since 2010, Hector is playing for the Philadephia Phillies in the different leagues and his debut in the Major Leagues was in the 2018 season. Hector is currently playing alongside some of the popular names of the MLB history including Jake Arrieta.