Gilles Simon is a former professional tennis player from France who won 14 singles titles on the ATP Tour and started his professional career in 2002. He was interested in tennis from his early days and started playing at 6. He always dreamed of playing on a packed center court as a kid. The former player considers backhand as his best shot.

Simon has played in many big tournaments and also won some of them. He broke into the Top 10 in 2008 after beating No. 1 Roger Federer in Toronto and No. 1 Nadal in Madrid, then peaked at No. 6 in 2009. Also, he qualified for the 2008 Nitto ATP Finals, defeating Roger in RR before losing to Djokovic in a 3-set SF. He had an impressive tennis career but has already stepped away from it after announcing his retirement in 2022.

Simon is estimated to have a net worth of over $10 million. Simon has earned all of his gains from his professional tennis career. During his long-term career, he preserved total prize money of $16,045,734 (Singles & Doubles Combined).

In 2002, Gilles received $654 in singles. Gradually, his income began rising, and in 2003, he earned $6,648 in singles and $875 in doubles. Throughout the years, Simon participated in many tournaments, which helped him earn name, fame, and whopping profit. Simon's final year was 2022; that year, he bagged himself $370,819. Apart from that, Simon has also worked with some sports brands, which helps him receive some fortune.

Gilles Simon Had a Sponsorship Deal With Head and Adidas

Simon is associated with the Head. While playing, he used a Head YouTek IG Prestige MP and a 2009 Team series bag. His racquet was strung with Head IntelliTour 16 String.

SoonWoo Kwon is also a tennis player who the Head endorses. He also had a clothing deal with Adidas, a renowned brand.

Who Is Gilles Simon's Wife, Carine Lauret? Their Marriage and Children

Simon is a married man who lives happily with his wife, Carine Lauret. She worked with Bouygues Construction as a communication intern from 2007 to 2009. Simon and Lauret began their romance when she was 24. After a year of dating, Simon asked her to leave his job to follow him in tournaments worldwide.

It is unknown when they married, but by exploring their social media posts, we can say that Simon and Lauret have been together for more than ten years. the duo is blessed with two children, Timothee and Valentin. Their older son, Timothee, was born in 2012. 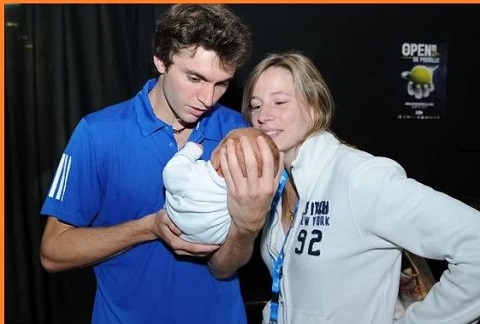 Gilles Simon and his wife with their child.  SOURCE: Live Sports

Simon has not hesitated to talk about his family life with the media. In 2020, the world was suffering from the COVID-19 pandemic, and during that time, Simon was also having a good time with his family members.

Gilles Simon was born in Nice, France, on December 27, 1984. Despite being born in Nice, the former tennis player was raised by his parents, Mireille Simon and Daniel Simon, in Fontenay-sous-Bois, outside Paris. His mother, Mireille, is a doctor, while his father, Daniel, is a worker associated with an insurance company.

Simon is not only the child of his parents as he was raised alongside his brother, Jean-Marie. Gilles received huge support from his parents from an early age which was easy for him to get engaged in tennis.

When Did Gilles Simon Retire From Professional Tennis?

Gilles Simon retired from professional tennis in 2022. On May 2022, Simon took to social media to announce that the 2022 year would be his final year. Before that, he also took a break from this sport for some time.

In 2021, Simon announced that he would be stepping away from the tour for an uncertain time because his heart wasn't in it and also for his Mental health. However, he returned to action in April at the Sardegna Open.