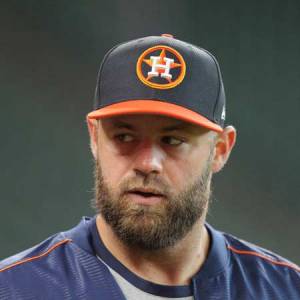 James Evan Gattis is an American professional baseball designated hitter and catcher playing for Huston Astros of Major League Baseball (MBL). On April 3, 2013, he made his MBL debut with the Atlanta Braves. Gattis also won National League Rookie of the Month Award for April and May in 2013. He became the Braves primary catcher in 2014 and later was traded to the Astros before the 2015 season.

Evan Gattis, who is reported to have the net worth of $10 million, is married to Kimberly Waters on January 14, 2017.

Evan Gattis Net worth and Salary in 2019

Gattis has so far made the career earnings of $16,726,039. His endorsement deals have also contributed to earning him the net worth estimated to be $10 million.

Gattis is married to his long-term girlfriend Kimberly Waters on January 14, 2017, in Frisco, Texas. The couple is believed to have engaged on October 23 of 2015. They received their marriage license at the Harris County Courthouse just before the Christmas.

Gattis and Kimberly were first seen together in October 2015. No further information is available.

Evan Gattis was born on August 18, 1986, and brought up in Farmers Branch, Texas. He started playing baseball at the age of six. He moved to Forney, Texas when he was 15-year-old.

Gattis played for the Dallas Tigers, which is one of the premier amateur teams in the Dallas-Fort Worth Metroplex. He also played on traveling All-Star teams with Austin Jackson and in the Junior Olympic Games along with Billy Butler, Homer Bailey, and Justin Upton.

Gattis intended to attend college baseball although having the potential for the draft pick in the first eight rounds of the 2004 Major League Baseball (MBL) Draft.  However, he went undrafted in the 2004 draft as his parent’s divorce and anxiety led him to abuse alcohol and marijuana.

He was taken to a drug rehabilitation facility for 30 days inpatient stay. He then went to Prescott, Arizona, where he had three months of outpatient therapy.

Gattis attended Seminole State College, a junior college in Seminole, Oklahoma. During the freshman season, he injured his knee, became burned out on baseball and quit.

Gattis then worked as a parking valet in Dallas. He later went to Boulder, Colorado to his sister’s place and reside there. He also worked in a pizza parlor and as a ski-lift operator.

He and his brother also worked as janitors for Datamatics Global Services. After meeting a New Age spiritual advisor he moved to Taos, New Mexico. Later he moved to California to find more gurus. He also moved to Wyoming, where he worked at Yellowstone National Park.

In 2010 Gattis decided to return to baseball. He was offered a spot on the Texas-Permian Basin Falcons by the coach Brain Reinke. He had a 403 batting average and 111 home runs that season.

He was selected by the Atlanta Braves in the 23rd round of the 2010 MLB Draft. He was added to the roster of the Rome Braves of the Class A South Atlantic League in May.

Gattis started his 2012 season with the Lynchburg Hillcats of the Class A-Advanced Carolina League. At the end of April, he was promoted to the Mississippi Braves of the Class AA Southern League.

He played in the Venezuelan Winter League and earned the nickname ‘el Oso Blanco’ Spanish for ‘the white bear’. Gattis was invited to spring training in 2013 by the Braves as a non-roster player.

On April 3, 2013, Gattis made his major league debut with his first hit as a major leaguer, a home run off of Roy Halladay in his second bat. He was also named the National League (NL) Rookie of the Month for April 2013.

He was sent to the Gwinnett Braves of the Class AAA International League on August 31 so that he can okay regularly and was recalled when the International league was over.

Gattis had surgery during the offseason to remove a bone chip which had bothered him since 2006. In a 1-0 win against the Philadelphia Phillies on April, Gattis went 4-for-4 with one home run.

On September 6, 2014, Gattis hit the game-winning home run against Miami  Marlins giving him a new career high and make him the first Braves catcher to hit 20 or more home runs in his rookie and sophomore season.

On January 14, 2015, Gattis along with James Hoyt to the Houston Astros for Mike Foltynewicz, Andrew Thurman, and Rio Ruiz. Spending most of the time as the Astros primary designated hitter during his 2015 season, Gattis hit 21 home runs in a career-high 604 plate appearances.

He started 11 games in the left field in 2015. The Astros planned to play Gattis in the field more and made a one year contract worth $3.3 million for the 2016 season along with a $5.2 million club option for the 2017 season.

He was optioned to the Corpus Christi Hooks of the Class AA Texas League on May 7, 2016, and was recalled on May 18, in order to transition back into a catcher.

The Astros won the 2017 World Series over the Los Angeles Dodgers with a 101-61, first in AL West. They won the world series in a deciding 7 games against the Los Angeles, giving Gattis his first championship title.