Eugenio Alejandro Suarez a.k.a. Eugenio Suarez is a Venezuelan professional baseball infielder currently playing for the Cincinnati Reds of Major League Baseball (MLB). Previously, he played for the Detroit Tigers.

Suarez who was an All-Star in 2018 currently has an estimated net worth of $10 million with an annual base salary of $7 million. Furthermore, the baseball infielder is married and shares a daughter with his wife.

Eugenio Suarez Net Worth and Contract

Eugenio Suarez has an estimated net worth of $10 million as of 2021. The significant source of his income is his baseball career.

Suarez owns a lavish mansion in Pinecrest, which he purchased in 2018. He paid $4.55 million for the 8,287-square-foot house at 6220 Southwest 108th Street. The Pinecrest estate features 6 bedrooms, 7 bathrooms, a kitchen with double islands, a media room, a guest suite, and an outdoor kitchen.

His fans and follower follow him on social networking sites. He is popular on Twitter and Instagram. Furthermore, info about his life and bio can be easily seen on Wiki.

Suarez is a married man. He tied the knot with his girlfriend, Genesis, in a secret wedding ceremony. The couple has an adorable baby girl, Nicole. However, he has kept his personal life away from the spotlight. Additionally, he has kept his Instagram account private.

He has a great personality. He has a height of 5 feet and 11 inches. His bodyweight is around 180lb.

From an early age, he has shown his great interest and devotion towards baseball.

Suárez initially signed with the Detroit Tigers on October 9, 2008, as an amateur free agent. He started his career by playing for the Venezuelan Summer League Tigers for one season. Later, he also delivered his performance for the Gulf Coast Tigers, Connecticut Tigers, and Michigan Whitecaps. 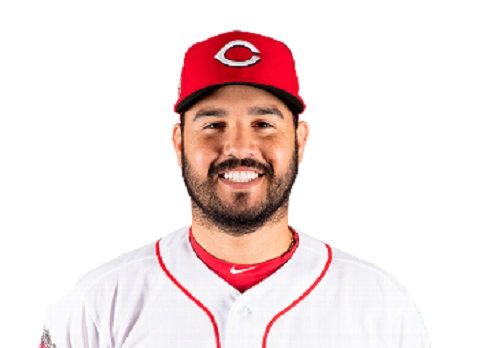 On June 7, 2014, he made his first major league debut in a game against the Boston Red Sox, where he recorded his first hit, a solo home run. He accomplished his rookie season with a .242 batting average, with 4 home runs and 23 RBI in 85 games.

On December 11, 2014, the Cincinnati Reds picked him. He still plays for the team alongside Matt Kemp, Curt Casali, Joey Votto, and Jose Iglesias.