Eric Cesar Chavez a.k.a. Eric Chavez is a Mexican-American retired baseball third baseman who played in MLB for Oakland Athletics (1998–2010), New York Yankees (2011–2012), and Arizona Diamondbacks (2013–2014). Currently, he serves as a special assistant with the Los Angeles Angels.

6× Gold Glove Award-winning the third baseman, Eric Chavez was born on 7th December 1977 in Los Angeles, California. The forty-two holds an American nationality and belongs to the white ethnic background.

Currently serving as a special assistant with the Los Angeles Angels, his salary is expected no less than the six-digit figure.

Besides, Eric sold his home in Paradise Valley, Ariz., for $4.75 million in 2016. The estate was built-in 2004, which features nearly 14,500 square feet of living space with four stone fireplaces, a two-story great room, a media room with a bar and a center-island kitchen. The master suite sports a marble-lined bath for a total of six bedrooms and 10 bathrooms.

Chavez married twice in his life. First, he was married to Amber Tarpy. But there is less to no information about his first wife but it comes to know that, they divorced in 2001. 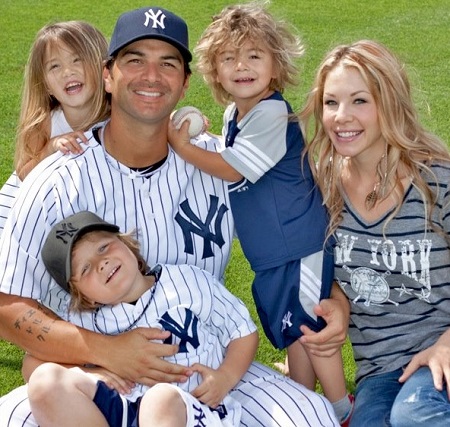 Eric Chavez with his wife and children SOURCE: GoHorseShow

Later, he exchanged the vows with Alexandra Chavez in 2003. In an interview, Alexandra revealed she met her husband Eric at a baseball game when she was eighteen. A year later, they married. Now, the couple shares three children: Diego, Dolce, and Cruz.

Chavez was born to Mexican father, Cesar who was a custodian at an elementary school and Ruby Chavez, worked at Rancho Bernardo High School. Chavez who was baptized Catholic later converted to Protestantism when he was eight or nine years old by his mother.

He has two brothers: Casey and Chris as well as a sister, Brandy Chavez. Though all four of Chavez's grandparents were from Mexico, he did not learn to speak Spanish.

For high school, Chavez enrolled at Mt. Carmel High School in San Diego. After graduation, he chose a professional baseball career over a full scholarship at the University of Southern California (USC).