Carlos Taberner is a Spanish professional tennis player who has been playing professionally since 2015. The Spanish player has played in many tournaments, including the Australian Open, French Open, Wimbledon, and US Open. Taberner achieved a career-high ATP single ranking of world No. 85 on May 23, 2022.

Furthermore, Taberner plays in ATP, and his ATP Tour debut came at the 2018 Open Sud de France in Marseilles. Like many rising tennis players, Taberner developed an interest in playing tennis at a young age. His favorite surface is clay, and his favorite shot is forehand. Carlos has received huge support from his family and is doing well in his professional life.

What Is Taberner's Net Worth? Here are His Career Earnings & Prize Money

Taberner is estimated to have a net worth of around $500,000, thanks to his professional tennis career. At the time of this post, he collected total prize money of $1,014,472. In the year he turned professional, Taberner bagged himself $5,654. Gradually, it increased, and in the following year, the tennis player took home $18,554. 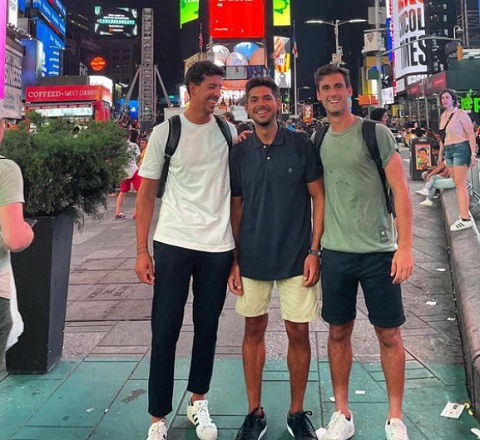 In the 2022 season, Taberner racked up a whopping $372,425. As the Valencia native is still active in this sport, we can be clear that his bank balance will skyrocket in the coming years. While he is not playing tennis, he spends time with his friends.

Taberner's Sponsors Are Adidas and Babolat

Being a professional tennis player, Taberner makes money from brand endorsement. Taberner mainly works with Adidas and Babolat. He has a clothing and shoe sponsorship contract with Le Coq Sportif, a french brand.

Taberner is not dating anyone and is single. In the past, he has not been engaged in romantic affairs. So, it can be said that Taberner has not dated anyone. Taberner is highly aware of his privacy, and rather than exposing his matters in public, he keeps them confidential. 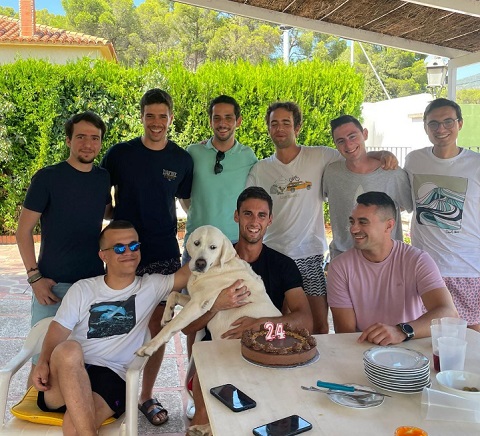 Carlos has shared a few posts with the same girl numerous times. She could be his girlfriend or just a friend. More about their relationship will be shared in the following days.

As said earlier, Taberner spends most of his spare time with his close ones. From his Instagram handle, we can see him enjoying his holidays with his friends. Furthermore, he also has a dog named Charlie. On August 8, 2021, he celebrated his birthday and posted a snap with his dog and friends.

The cake was ordered from La Prrciosisima Tarta. Taberner also thanked them, saying, "the cake is great."

Who Are Juan and Alicia? Meet His Parents

Carlos Taberner Segarra was born in Valencia, Spain, on August 8, 1997. Taberner comes from a superior family. His parents are Juan (father) and Alicia (mother). Both his father and mother are doing well in their professional life. Juan is a businessman, while Alicia is a tax advisor. Taberner is a family person who loves spending time with his close ones during his spare time. Tarberner grew up with his sister named Ana. We can see him posting some moments with his sister too. Apart from tennis, he is also interested in football. His favorite sports team is the Spanish football club Levante.

While growing up, Carlos took David Ferrer as his idol.

Professional since 2015, Taberner's ATP Tour debut came at the 2018 Open Sud de France in Marseilles. In the qualifying round, he defeated Benjamin Bonzi and Marco Trungelliti. Likewise, he won a round against Norbert Gombos. 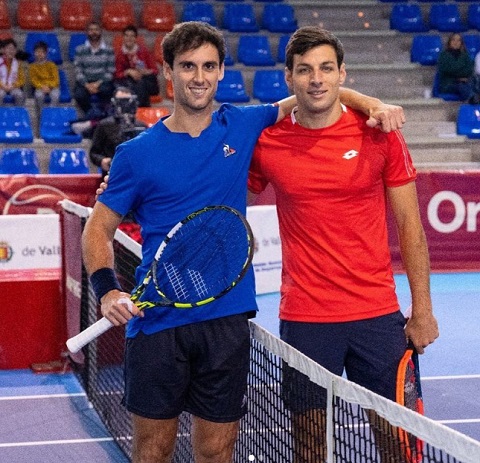 Carlos Taberner with his opponent in a game.  SOURCE: Instagram @carlostaberner

Furthermore, Taberner made his Grand Slam debut at the 2018 French Open, losing against Stefanos Tsitsipas. Also, he participated in the 2021 French Open. His third Challenger title came at the 2021 Open du Pays d'Aix. Taberner began his 2022 after playing against Dominik Koepfer at the 2022 Australian Open.