Camille Tytgat is a stunning French girl who is a wife of famous French soccer star Raphael Varane. Additionally, Raphael is one of the talented players of Real Madrid and was also the important squad player of a French soccer team which won the 2018 FIFA world cup.

Camille and Raphael exchanged their marital vows on June 21, 2015. Additionally, the couple shares a massive net worth over $15 million. Are you interested to know more about this soccer WAGs? If yes, make sure you have the patience to go through this article.

How much Net Worth does Camille Tytgat shares with her Husband?

Well, we have no idea about what Camille does professionally to support her family financially. However, she shares a massive net worth over $15 million with her husband, Raphael Varane. Additionally, Raphael earns $155,435 as a weekly wage. Also, with the reference of his defensive capabilities, his current market value can be estimated to be more than $100 million.

Besides, the couple is living a luxurious life which is entirely financed by Raphael professional career. Also, the duo is regularly spotted enjoying their private time in some of the exotic places around the world, spending money extravagantly. Besides, the couple had to go through a robbery, which resulted in them to lose $72,684, including clothes, jewelry, and watches.

Is Camille Tytgat Married? Know about her Personal Life in Details

Yes, Camille is enjoying a smooth relationship with a famous French soccer player, Raphael Varane. As per the reference of their current age, we assume them to be together since their teenage. Moreover, both of them attended the same school as kids and have managed kept a stable relationship since then.

Further, the couple tied a knot on June 21, 2015, after dating for several years. The wedding ceremony was held luxuriously at Le Touquet in France where both of them were dressed beautifully with a matching white wedding dress.

In September 2016, Camille and her husband announced that they were expecting a baby. Later on March 9, 2017, the couple was blessed with an adorable son, Gaston. 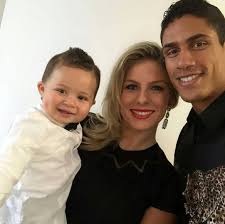 Besides, the couple was never involved in the news regarding the divorce, which suggests that they are enjoying their marital relationship. However, she has maintained her life low profiled; however, she has been spotted a few time with the young soccer player, attending events together.

Also, she is yet to be found in social media, and this might be the only reason why there isn't much information about her personal life on the internet to date.

Camille is a French native, but the details about her birth date and birthplace are not in the media yet. Moreover, she belongs to the ethnic group of white while her husband is of Mixed ethnic group. Compared to her husband's early life, the information about her early life and childhood are still undercover.

Well, we are always searching for the information, and undoubtedly, we will come up with all the detailed information, make sure you don't forget to visit us regularly.

Although she looks like a model, the information about her professional career is still out of reach of media. However, she is famous as a wife of soccer star Raphael Varane who currently plays as a defender for the Spanish club, Real Madrid. Also, he was the member of the French team who won the 2018 Fifa World Cup.