Bryan Rust is an American professional ice hockey player playing as a winger for the Pittsburgh Penguins of the National Hockey League (NHL). The Pontiac, Michigan native was interested in playing ice hockey from an early age. His professional career began after getting selected with the 80th overall pick in the third round of the 2010 NHL Entry Draft.

Bryan played from 2010 to 2014 at the University of Notre Dame. Before that, he also played with the Detroit Honeybaked minor ice hockey team. He represented the team in the 2005 Quebec International Pee-Wee Hockey Tournament. During his collegiate career, Rust played a total of 161 games totalling 97 points. In his senior year, he also became an alternate captain. Being an American, Rust also played for the United States team at the 2010 IIHF World U18 Championships.

Rust and His Wife, Kelsey, Married Life: How Many Children Do They Have?

Rust and his wife, Kelsey Burton, have been in a marital relationship for quite a while now. The married couple dated each other for years before tying the knot in 2019. The duo lives a low-key life, due to which there are not many details regarding their love life. 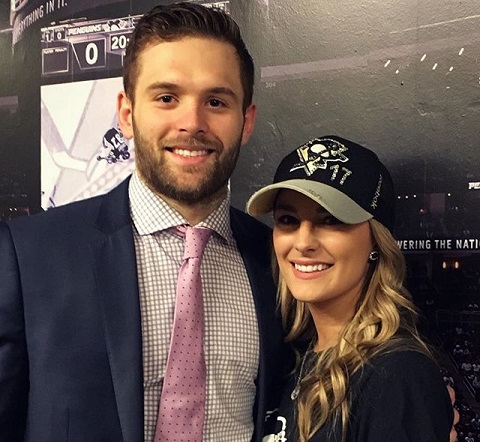 Being married for over two years, Rust and Kelsey have also started a family of their own. In December 2020, the pair announced they were expecting their first child. So, in May 2021, the family increased when they welcomed a cute son named Hunter Rust.

Bryan Rust Net Worth: His Salary In at Pittsburgh Penguins

Being a professional ice hockey player, Bryan Rust has amassed an impressive fortune. Exploring his career earnings, it is speculated that Rust enjoys a net worth of over $10 million. Playing in the NHL, Rust has total career earnings of $21,045,000 at the time of this post.

Playing professionally since 2014, Rust has had impressive deals with his team. Currently, he has a whopping $30,750,000 contract with the Pittsburgh Penguins. With that, he earns an annual average salary of $5,125,000. His deal with the team in the previous season was around $3.5 million.

In the 2014-15 season, Rust earned total cash of $640,000. Gradually, it increased, and his salary came to six figures. The professional ice hockey player lives a lavish life with his great income.

Bryan Rust Grew Up With Two Siblings – His Family Background

Bryan Peter Rust was born on May 11, 1992, in Pontiac, Michigan, U.S. His parents, Steve and Betsey Rust raised the ice hockey player. Rust is not only the child of his parents, as he grew up with his two siblings.

His brother, Matt Rust, is a retired AHL player who played for the Wilkes-Barre Scranton Penguins during the 2011–12 AHL season. The details regarding his other sibling remain unknown as Rust has not talked much in the media. Rust must be living a lowkey life with them, just like another Pittsburgh Penguins player Tom Kuhnhackl.

As said earlier, Bryan Rust's professional career kicked off after playing with the Wilkes-Barre/Scranton Penguins.  Bryan's AHL debut came with the same team in the 2013-14 AHL season. On December 13, 2014, Rust made his debut for the Pittsburgh Penguins team while playing against the Columbus Blue Jackets.

Bryan Rust holding a trophy after a win SOURCE: wikiwand.com

On December 15 of the same year, Rust scored his first NHL goal against Evgeni Nabokov of the Tampa Bay Lightning. His career got more hype when he recorded his first career hat trick in an 8-5 win over the Ottawa Senators on December 5, 2016.

Giving his best performance, Byran also helped his team to win some games. He also helped propel the Penguins to the 2018 Stanley Cup playoffs. Bryan scored his 99th and 100th NHL goals on May 1, 2021. It was in the game against the Washington Capitals. Alex Ovechkin is an ice hockey payer playing for the Washington Capitals. Furthermore, Rust's contract with his team was increased on May 22, 2022. It is his final year.

How Tall Is Bryan? Physical Appearance

Bryan is a tall, handsome hunk hockey player whose physical appearance is also talk-worthy. So, talking about his height, Rust is 5 feet 11 inches tall which is 180 meters. And he weighs 88 kg.