St. Petersburg, Florida Native Brittany Lincicome is an American professional golfer. She is currently associated with the LPGA Tour. She is often called by the nickname "Bam-Bam." She has been playing professionally since 2004 and is ranked among the top female golfer in the United States. She has represented her nation in several international tournaments.

Brittany Lincicome was born Brittany Grace Lincicome on September 19, 1985. She is among the three children born to Angie Lincicome and her husband, Tom Lincicome. Brittany did not come from a reputed family, so; there is not much information about her parents and early life. She has two elder brothers named Hunter and Bryan. Brittany is yet to share about her education and academic qualification.

Brittany Lincicome's Net Worth In Millions

Brittany Lincicome an estimated net worth of more than $9 Million. She has accumulated most of her net worth to her successful career in golf. It's been more than fifteen years of her career in golf, and she is earning millions. Brittany is ranked at 23 positions in the All-time Money List for Female Golfer with total earnings of $9,254,891. 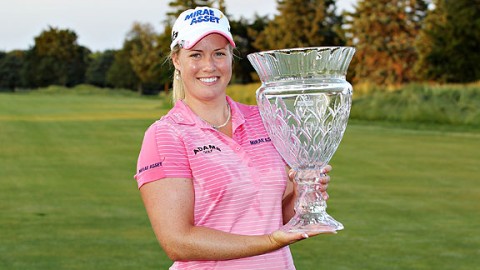 In 2020, Lincicome earned $27,839 from the CME Group Tou Championship. Brittany earned her first significant prize money worth $500,000 after winning HSBC Women's World Match Play Championship in 2006. Since then, She has won a total of six significant events from which she has earned more than $3 Million. Brittany must have made a reasonable sum through her contracts and endorsement deals.

In 2010, She signed a multi-year deal with Mirae Asset Global Investments. In 2019, After returning from her childbirth, Her sponsors CME and Diamond Resorts continued to support her and has been with it ever since. In 2020, She bought a lavish house in the states.

Mother of A Daughter; Who is her Husband?

It is a matter of the fact that Brittany is a proud mother of a daughter. Brittany is living a happy married life along with her husband and her son. Brittany is married to her longtime boyfriend, Dewald Gouws. The love birds tied their wedding knot on December 12, 2015, at the Sandpearl Resort in Clearwater Beach, Florida. Dewald is a former long-driver from South Africa. There is not much information about their first meeting instance. 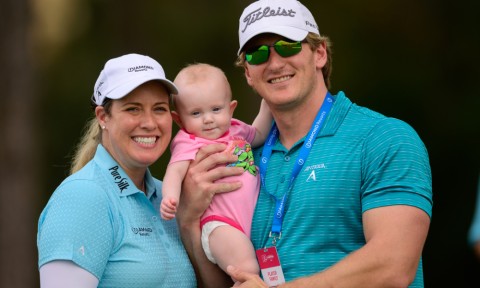 Brittany with her husband and child SOURCE: Golf Digest

In February 2019, Brittany opened about expecting a baby soon. She announced on social media Tuesday that she and her husband Dewald Gouws are expecting a baby. On July 8, 2019, Lincicome welcomed her first child, Emery Reign Gouws, eight weeks early. The family of three is living a peaceful life.

The Journey from A Rookie To One of the Best

Brittany won her first major tour of the American Junior Golf Association in 2001. She came to the limelight after qualifying for the 2004  U.S Women's Open. Shortly after this series, She started her professional career qualifying for the 2005 LPGA Tour.  The golfer won her first major title in 2006, winning BSBC Women's World Match Play Championship.

After winning the first Tour, Lincicome started climbing the ladder of success and won a total of 8 LPGA Tour Wins. She is still playing at the peak of her career. In 2009, She reached the peak of her career with the 9th career ranking. As of 2021, She is ranked 39th by the World Golf Ranking.