Brandon Crawford is an American baseball shortstop who currently plays for the San Francisco Giants of Major League Baseball. He started his career with San Francisco in 2011. He also played college baseball for the University of California, Los Angeles (UCLA). He was the sixth player in the history of MLB who hit a grand slam in a first major league game

Brandon Crawford was born on January 21, 1987, in Mountain View, California, United States. He is American. His ethnicity is white. His star sign is Aquarius. He attended Foothill High School based in Pleasanton where he was lettered in football, basketball, and baseball. He was the starting quarterback for the foothill Falcons. He completed his graduation in 2005.

Brandon Crawford is married to his wife Jalynne Dantzscher. He married his longtime girlfriend after having a long affair on Nov 26, 2011, in Kona, Hawaii. He met his sweetheart at UCLA. Currently, they are living happily as a husband and a wife. They have two daughters and a son.

His wife Jalynne is a former gymnast for the UCLA and attended the same college as her husband. His spouse is also the sister of Olympic gymnast Jamie Dantzscher. 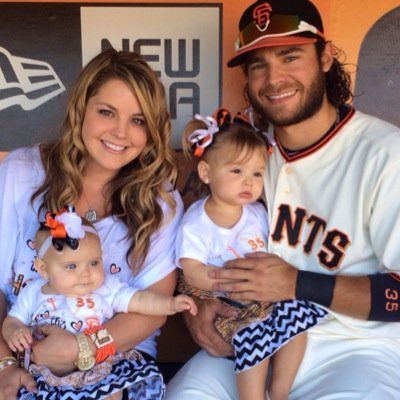 Brandon Crawford with his wife and two children SOURCE: Pinterest

Brandon Crawford is the son of Mike Crawford and Lynn Crawford. He is not the single child of his parents. He has three sisters named Jenna, Amy, and Kaitlin. His sister Amy Crawford is married to pitcher Gerrit Cole who plays for Pittsburgh Pirates.

Brandon Crawford has reached the age of 30 now. He stands 6 feet 2 inches, which is around 1.88m. His weight is around 98 kg. He played a pivotal role in the game of baseball. He is popular but never has been part of the controversy.

According to the new contract, he will have a huge amount of wealth by the end of 2021. He has a whopping net worth of $20 million.

Brandon Crawford is one of the most valuable assets of the baseball world. His dedication and devotion are worth watching for the upcoming generations. He is earning a fortune amount of salary for his performance.

Upon high school graduation, Brandon Crawford attended UCLA where he played baseball for UCLA Bruins from 2006 to 2008. While playing with UCLA Bruins, he leads his team to the NCAA Regional’s in three consecutive seasons, and it was the first time in the school history. The year 2007 was outstanding for him. He named MVP in 2007. In the same year, he was also named ALL-PAC-10 conference team in 2007. He also participated and performed in the Cape Cod Baseball League.

In 2008, Brandon Crawford was selected by Giants and started his minor league with the San Jose Giants. On May 27, 2011, he made his major league debut against the Milwaukee Brewers while playing with Giants. After playing four seasons with Giants, in 2015 he agreed to a six-year $75 million contract through the 2021 season.