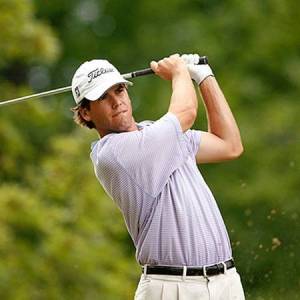 Ben Martin is an American professional golfer who has been playing in the PGA Tour since past five years. He is one of the recognized golfers from United States. He has won one PGA Tour, two Web.com Tour and one EGolf Professional Tour. Though he has the struggling career, he is learning, training and trying to improve his skills so as to deliver the best performances in the game. He takes every of the critics as suggestion and move on trying to improve on that which seems to be his positive quality.

Born on August 26, 1987 in Greenwood, South Carolina, he stands the height of five feet and 11 inches tall having the body weight of 79 kilogram. He is a young, enthusiastic and keen to learn personality. He had completed his school in South Carolina and is a graduate of Clemson University. He had played for his school and college golf team while he studied there.

During his collegiate year, as a senior, he had played in three major championships and stood the runner-up in 2009 U.S. Amateur. With the success, his continuous labor and commitment, he turned professional in 2010. He got qualified to play for the 2011 PGA Tour after he finished runner-up at the qualifying school. Following his qualification in PGA, he made the cut in 12 events out of 25 and failed to earn enough money to retain his card for 2012. Therefore, he played in the Web.com Tour in 2012 and 2013 wining his first tour at 2013 United Leasing Championship. Later he earned the second place in 2013 Web.com Tour earning enough money to earn his 2014 PGA Tour Card. On 2014 October, he got his first PGA Tour victory at the Shriners Hospitals for Children Open. He is boosting up his skills to earn more of the trophies and rank in the Tour money list. He enjoys a good net worth and earns a good sum at present.

Moving on to his personal life, he has not disclosed any information about his parents or even childhood. He has maintained his privacy to himself and does not want public to learn about it. Moving on to his relationship status, he is a married man. He is married to his sweetheart Karen Kelly Pearce. They got married in 2013. The couple is living happily together. There has not been any announcement if he has already been a father is going to be. There has been no any record of his affairs with anyone in the past and has maintained his clean image and is very loyal to his wife whom he loves very much.

There is a very little information about him on Wikipedia or any other sites because of the less traces of the records and his wish upon privacy. However, he is active in the social sites which seem to be beneficial to learn more on him.