Becca Longo is an American football player who gained widespread recognition as the first lady to receive a college football scholarship to an NCAA school at the Division II level. She made that record after signing a letter of intent with Adams State University. Throughout her life, Becca has been involved in sports, from water skiing or basketball.

The young football kicker attended Basha High School in Chandler, Arizona. Likewise, she also played at Queen Creek High in Arizona. As said earlier, she is famous as the first female to receive a football scholarship. She was awarded the scholarship and regarded as an equal teammate to others on the ground. Unfortunately, in 2018 Longo suffered an injury that withheld the star in her.

How Much Is Becca Longo's Net Worth? Short Details on Her Earning Sources

Becca has added a decent fortune under her name, but her actual net worth remains under review. Becca is still a college-level player and has a long way to go. So, if Longo plays in the NFL in the coming years, she will surely take home cash in the six figures.

We have records that the professional NFL player earns more than $1 million. For your information, Sarah Fuller is also an American soccer player whose net worth is over $100,000. Apart from that, Longo may now be earning money from brand endorsement. 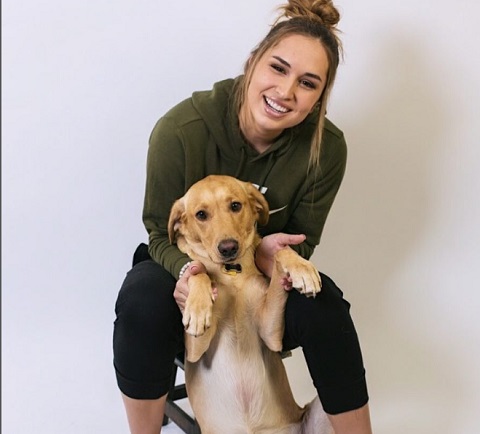 Becca Longo with a dog in a photoshoot.  SOURCE: Instagram @beccalongo5

Longo has made some posts on Instagram where we can see her wearing clothing from many brands, including Nike and Jockey. During her spare time, Longo loves exploring different places, and we can be clear that Longo is relishing a quality life to the fullest.

Longo is in a romantic relationship with her boyfriend, James Ackel. Longo and Ackel have been dating each other for over three years, and their love life is still going well. Being together for a long time, they have already created many beautiful memories by visiting many places.

It is unknown when Longo began dating, but she made her first post with her partner on October 26, 2019. At the end of the same year, the pair went for a buggy ride in Havasu Lake, California. On August 1, 2020, Longo shared a video of herself with her partner wishing him on his birthday, saying, "Happy Birthday Handsome; Can't wait to celebrate you today." 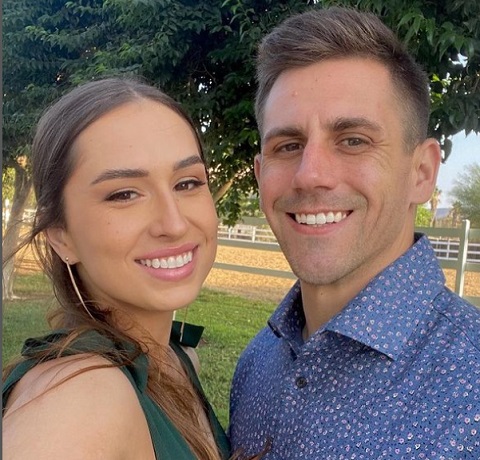 Being together for a long time, they have not married, but the lovebirds might be planning. As of now, both of them are focused on their professional life.

James Ackel Is an Entrepreneur and Football Player

Longo's boyfriend, James Ackel, is an entrepreneur who operates his own business. He is the founder of E-Power Rides, a company that offers a variety of EPOWER-RIDES for kids, adults, sports, and commercial businesses.

In addition, Ackel is also associated with his family business, DispoRep, a company that provides video marketing services for dispensaries, brands, and cultivators. We can find him active on Instagram as @jamesackel. From his IG handle, James features everything from his professional to personal life. James Ackel with his friends in a football game.  SOURCE: Instagram @jamesackel

Besides that, Ackel is also a football player who is said to be playing in the Indoor Football League. He is an Adams State University alumni. Ackel went undrafted to the Indianapolis Colts team.

What Is Becca Longo Doing At Present? Find Her on Instagram

As we know, Becca is not associated with any teams at the time of this post. So, at this time, she is polishing her skills, and we can expect that she will play in the National Football League (NFL). Longo can now be found working out in the gym and also training.

Furthermore, Becca shows her lifestyle via her Instagram handle, where she is verified as @beccalongo5.

Beginning with her early career, Becca went to Basha High School in Chandler, Arizona, where she played various sports. During her sophomore year, she began playing competitively. Likewise, she remained a junior varsity kicker at Queen Creek High, but she was allegedly benched out for her junior year after switching to Basha High.

During her final year at high school, Longo converted 35 extra points on 38 attempts. So, Longo made four out of her four tried field goals, with her longest at 30 yards. At the time, she also received great support from her father despite choosing to kick a different ball. 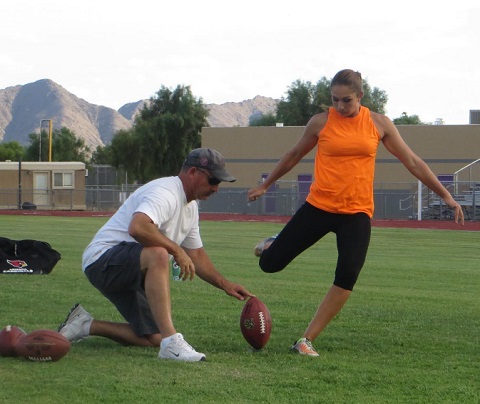 Becca Longo is in training with her father.  SOURCE: Instagram @beccalongo5

In the same way, Longo was led to Gilbert Christian High school to attend a kicking camp organized by the Arizona Cardinals. She again made headlines when she scored first in a sport she had never played. When Longo joined Adams State University to play for Adams State Grizzlies, she was redshirted for a year. During the 2018 season, she suffered an untimely ankle injury which led her to leave her scholarship without playing a down in a game.

Despite that, her passion for sports didn't end, and she announced that she wished to pursue other university opportunities. In September 2019, Becca revealed that she had joined the Gila River Hawks of the 4-team Hohokam Junior College Athletic Conference. However, she was disbanded by the conference after one season.

Longo was born Rebecca Longo on March 17, 1999, to her parents Andrea Longo and Bob Longo, in Chandler, Arizona, U.S. Shaylee Gonzales is also a native of Chandler. Becca is not only the child of her parents as she was raised alongside her older brother named, Bobby Longo. 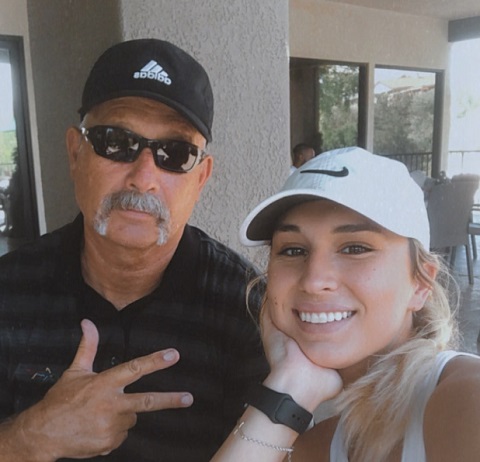 From an early age, Becca was exposed to sports as she has an athletic family background. Becca and her brother share a strong bond. Her brother was also a football player who reportedly played as a defensive end. So, Becca took inspiration from her brother.

As a young girl, Becca went to her brother's football matches and was drawn to his teammate, Heidi Garrett.