Andrew Eugene Pettitte better known as Andy Pettitte is an American retired baseball pitcher who played 18 seasons long in MLB for New York Yankees (1995–2003, 2007–2010, 2012–2013) and Houston Astros (2004–2006). He was selected in the 22nd round of the 1990 Major League Baseball draft by Yankees but chose to play college baseball the Yankees retained the right to sign him as a draft-and-follow prospect.

On 4th February 2011, Pettitte announced his retirement after months of speculation about his future. Subsequently, he spent over a year away from baseball but return as a guest instructor in 2012 and again retiring in 2013.

Born on June 15, 1972, Pettitte is Baton Rouge, Louisiana native. He holds an American nationality who came from Italian and Cajun descent.

How Much Pettitte Earned From His MLB Career? Know His Net Worth & Contract

As of 2020, Andy Pettitte has a jaw-dropping net worth of $75 million, soley summoned through his 18 years stint as MLB player. His MLB career earning is listed below:

Upon being a free agent in 2003, Pettitte joined Houston signing a 3 year $31.5 million contract. In December of 2006, he returned to Yankee, agreeing on a 1 year $16 million contract and extended the following year for the same figure.

Andy Pettitte is not the only athlete who came out of retirement: Marshawn Lynch and Jason Witten are on the list.

A Married Man With Four Children

Andy Pettitte tied the knot with his long-time girlfriend, Laura in 1992. Though they attended the same high school, Deer Park High School, the duo met at Central Baptist Church when he was fifteen. Laura was the pastor’s daughter who taught him a lot about biblical integrity. 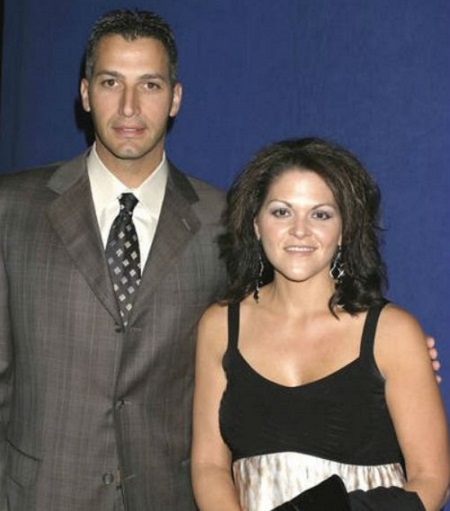 What's more, Laura had three older brothers with whom Pettitte got extremely close. After some time, Laura and Andy Pettitte started dating: she was in eighth grade and he was in tenth grade.

A devotee Christians, Andy, and Laura made a commitment to one another that they are not going to have sex until they got married. He said, "I don’t think people realize how huge of a commitment that is, especially with teenagers. If you commit yourself to not doing that, then you’re going to focus on other things in your relationship."

On 3rd November 1994, Andy and Laura welcomed their first child, a son, Joshua Blake Pettitte. Later four years on 28th May, they had their second son Jared Pettitte. 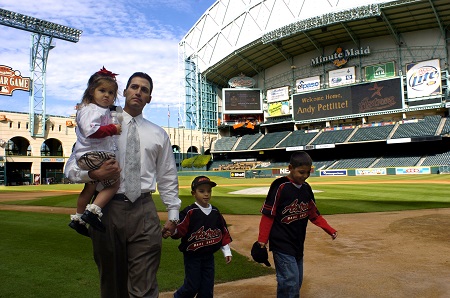 On 10th January 2001, their first daughter, Lexy Grace Pettitte was born. By 2005, the family extended to six, following the birth of their third son, Luke Jackson Pettitte.

Among the four, the eldest, Joshua was picked by the Yankees in the 37th round of the 2013 MLB draft, however, the young talent chose to enroll at Baylor University rather than sign a professional contract. Currently, he plays at Rice University after transferring from Baylor in April 2014.

Back in September 2006, the Los Angeles Times published that former relief pitcher Jason Grimsley, during a June 6, 2006, federal raid by federal agents investigating steroids in baseball, named Pettitte as a user of performance-enhancing drugs including Roger Clemens and three others.

Later a month, it was disclosed that neither the name of Clemens nor Pettitte appeared in the affidavit submitted by Grimsley.

On December 13, 2007, Pettitte was one of several Yankees named in the Mitchell Report after he was discovered using HGH on 2–4 occasions in 2002. Pettitte agreed on the use of  HGH but clarified it was meant to help heal an injury, and not to enhance his performance.

However, the affidavit on 13th February 2008 changed the whole scenario where Pettitte admitted to additional injections of HGH twice in one day in 2004, using HGH obtained via prescription for his seriously ill father. Further, Pettitte recalled being told by former Yankees teammate, Clemens in 1999 or 2000: he had recently received injections of HGH which also mentioned in that affidavit. 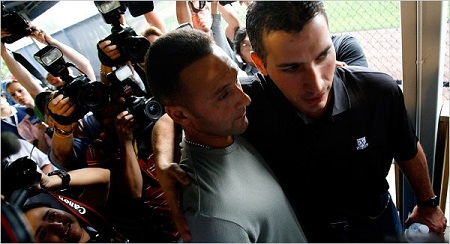 Pettitte addressed his use of human growth hormone at a news conference SOURCE: nytimes

During the noted hearing that Pettitte "misremembered" Clemens claimed his 1999/2000 HGH remark, alleging that what Pettitte really heard was Clemens's reporting of his wife's use of HGH at that time. Nonetheless, Clemens earlier denied knowing of any use of HGH by his wife. McNamee rectified Pettitte's recollection of events.

On February 18, 2008, Pettitte apologized to both Yankees and Astros fans for his past drug use. In the press conference, he states the performance-enhancing-drug scandal has wrecked his friendship with Clemens.

Andy was born as younger of two children to Tommy (French and Indian) and JoAnn Pettitte (Italian). He was raised in a very strong Catholic family. The Pettitte family later relocated to Texas where he enrolled at Deer Park High School and pitched for the school's baseball team.