Besides playing for Boston Red Sox, he has played baseball at the college level for Arkansas Razorbacks in the University of Arkansas.

Andrew Benintendi is of American nationality. He was born to mother, Jill Benintendi, and father, Chris Benintendi on July 6, 1994, in Cincinnati, Ohio, USA.

He did his schooling from Madeira High School in Ohio and finished his career at the high school with Ohio record of 199 home runs.

After rejecting an offer with Cincinnati Reds, he went to play for University of Arkansas' baseball team, Arkansas Razor.

Net worth and Salary of Andrew Benintendi

A popular and successful American baseball player has amassed a good deal of money through his relatively fresh Baseball playing career.

While his annual salary of 2018 is still under review, it is clear the promising player of Major League Baseball team of Boston Red Sox stars are rising which is shown in his expected growth in earning annuals. 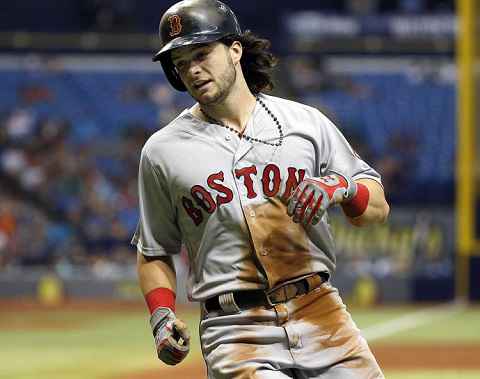 Hence, looking at his professional playing career, his net worth is the region of $3 million.

He started his professional playing career with the American baseball team, Boston Red Sox where he was the picked as the seventh draft in the  Major League Baseball Draft pick held in 2015.

His signing bonus amount was $3.6 million and made his professional debut with the New York Pen League team of Lowell Spinners.

After being promoted, he made his major league debut against Seattle Mariners where he played as a  pinch hitter on August 2, 2016, and scored his first major league hit on August 3, 2016, against the same opponent.

He scored his first home and triple run in the major league against Detroit Tigers on August 21, 2016.

Benintendi started his 2017 season in the opening day roster of  Boston Red Sox and batted in the second against in a winning effort against Pittsburgh Pirates and recorded two home runs and double in a victorious effort against Texas Rangers, on July 4, 2017.

He stood second in the AL Rookie of the Year in 2017 behind Aaron Judge and became the first 20-20 rookie since Mike Trout in 2012.

Currently 24, he stands at a height of 5 feet 8 inches tall and weighs around 77 Kg. The Cincinnati, Ohio native, Andrew Benintendi is of mixed heritage as his grandparents from his father sides are of Italian origin.

According to recent reports and sources, he is currently engaged to his girlfriend as seen on his Instagram post of March 2018.